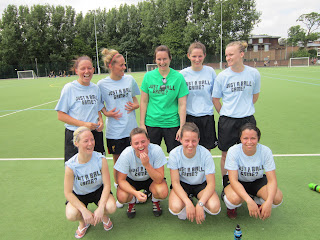 
A big well done done and thank you to our patron Andie Worrall and her Manchester City Ladies team mates and on loan Liverpool Ladies Katie Brusell for teaming up to play for Just a Ball Game? in a women's 6-a-side Tournament in Manchester.
The team finished top of the round robin section playing 5 games at 30 minutes in sweltering heat not drooping a point to finish on 15, and also amassed 14 goals along the way. Krystle (Joey) Johnson was JBG? top scorer for the day, and Andie even chipped in with a goal when say made a cameo as an outfield player for a couple of games scoring with a fine strike from 20 yards just 7 minutes after the start of the match.

Just a Ball Game? entered the tournament to raise awareness around LGBT issues and inclusion and also challenge homophobia that is sadly within our beautiful game.
The team wore special edition JBG? logo t-shirts and were enthusiastically cheered,as were all the teams by thousands of Parklife festival goers from all over the country  who lined the street over looking the Armitage center  3g pitches as they waited for transport to take them across the city.

The Pride Games, Football v Homophobia  Cup  day was hosted and run by 3Style sports: http://3stylesports.co.uk/ and was competed for by 6 teams:
JBG?-Manchester Stingers-Chester Lasses-Claaasic-Birkenhead-Coyotes. 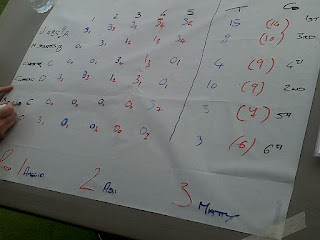 As group leaders the JBG? team faced team Claaasic in a tightly contested affair not long after beating them in the final group game, but they unfortunately ran out of steam loosing 1-0 to an early goal, and hitting the woodwork no less than 8 times and forced 2 excellent saves from the keeper as they tried to force extra time in the play off game which only ran for 15 minutes.

The medals were presented  to the girls by Andie's fellow JBG? patron and GB Sitting Volleyball  Captain Claire Harvey who had been in Manchester for the day taching her skills to a number of school children. 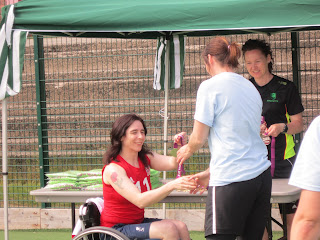 If you would like to find out more about JBG? and what we do and support us buying our t-shirts and banners,or come on board as a partner club or organisation please visit:
justaballgame.co.uk
tweet us : @justaballgame 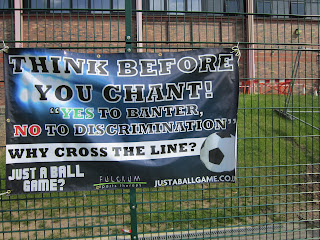