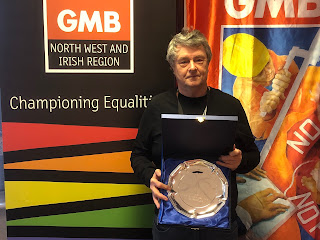 JUST A BALL GAME? (JBG?) are delighted to announce that trade union region GMB NW&I have been recognised for their efforts on challenging discrimination and raising awareness around LGBT+ inclusion and visibility with the JBG? annual award. The subdued ceremony has taken place during 2021 LGBT+ History Month and formed part of the organisations 10 year anniversary.

The silver salver award took place as part of the regions Shout! LGBT+ network event and was handed over to regional secretary Paul McCarthy and political officer Neil Smith by Ann O’Byrne, a Liverpool Labour Councillor. 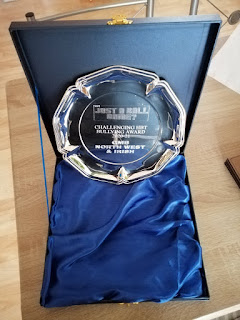 Over the past 18 months the trade union staff and members have given fantastic support to JBG? alongside the network of local LGBT+ members and strived to make work places inclusive and LGBT+ people feel represented and included in all aspects of activism and educational work platforms.

On being presented with the award Mr McCarthy expressed, “On Behalf of our GMB NW&I Region, I am delighted in receiving this reward for the work which champions our LGBT+ commitment and strengthens everything which equality stands for in a modern society. Thank you to Just A Ball Game? for this award and we look forward to equality for all of our LGBT+ members.” 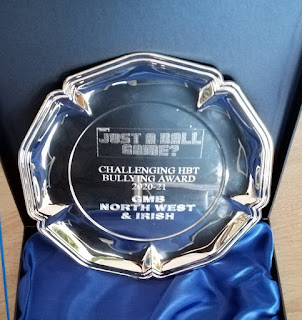 GMB National President Barbara Plant attending the event and also a patron of JBG? stated, “GMB North West and Irish region has always been a staunch supporter of Just A Ball Game? They are worthy winners of this award, which recognises their commitment to LGBT+ inclusivity and equality. I was pleased to being able to see them receive it at the region's recent on-line LGBT+ event.”

Founder of JBG? Lindsay England expressed, “GMB NW&I are extremely deserving of this award for their time, efforts and compassion shown to LGBT+ members and a wider audience. They are always available to listen, learn and lead on issues and proposals of equality inclusion and diversity. Anyone looking at joining a trade union would instantly benefit from their advocacy. We are proud to call them comrades.” 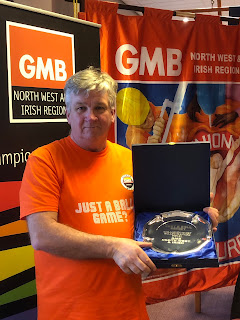 In 2020 JBG? compiled a survey on HBT abuse in sport and released a report highlighting that some progress has been made over the past decade but also detailed how much more work still needs to be done to ensure the workplace of a sporting environment is a welcoming one for LGBT+ people and their allies: http://www.justaballgame.co.uk/blog#JBG?surveyfi