Just a Ball Game? caught up with Patrons GOSSIP on tour a couple of weeks ago and on attending the show wearing an Equal Marriage Scotland t-shirt director Lindsay England saw it commandeered by singer Beth Ditto who promptly dressed in the shirt for the remainder of the set. Here’s the story with pictures and links to the video 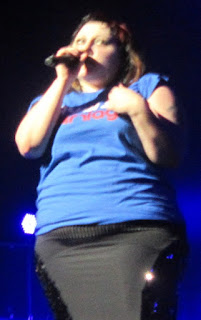 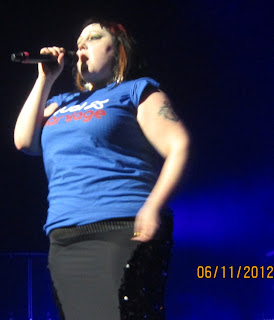 As the USA turned out to vote and LGBT campaigners across the Atlantic marched through the streets of Paris in favour of legislation on equal marriage this week, alternative music fans in the French capital attending 2 sold out GOSSIP shows were privy to singer Beth Ditto showing support for LGBT equality while singing 'gay anthem' Standing in the Way of Control when she asked a friend in the audience to hand her an EQUAL MARRIAGE SCOTLAND t-shirt, which was held up and then promptly worn generating loud cheers from all present. The lyrics were also extended to include a Nina Simone quote:


TO LIVE NEXT TO ME


JUST GIVE ME MY


* Standing in the Way of Control was written as a response to the Federal Marriage Amendment which would have constitutionally outlawed same-sex marriage in the United States. Beth says of the song: “Nobody in the States was that surprised or shocked by what Bush did, but it made everyone I know feel helpless and cheated. I wrote the chorus to try and encourage people not to give up. It’s a scary time for civil rights, but I really believe the only way to survive is to stick together and keep fighting.”


* SITWOC was re-released as it charted mainstream as the theme to teenage drama SKINS.

JBG? and HYDE FC joined forces to celebrate Football Against Racism in Europe with a day of inclusive events to highlight  the need for expanding access to sport for all.


The event was hosted by Hyde FC. Amongst the events were both competitive and non-competitive football training with John Hurst from Manchester FA and Neil Gillespie of Hyde FC. There was also an opportunity to experience sitting volleyball and other games which promote inclusivity,

Claire Harvey, Captain of the Team GB Olympic Sitting Volleyball Team was due to lead the session but unfortunately was involved in a motorway accident en route. Thankfully, only the car was injured! So JBG?’s mascot, Castro the Cat got involved got involved as you can see!

Local MP Jonathan Reynolds visited and congratulated JBG? and Hyde on the day. He was very interested in the philosophy of FARE, JBG?’s campaigning against Homophobia in Sport and Hyde FC continued involvement in both campaigns. Jonathan even got a thumbs up from Castro! seen here with Andy McAnulty, Hyde FC , Club Secretary


The day was organised by Lindsay England from JBG? who was delighted with the day and thanked FARE for the funding for the event, HYDE FC, Manchester FA , Jonathan Reynolds MP and of course, the youngsters  for their support and JBG? sends best wishes to Claire Harvey and her car!
Posted by Anonymous at 17:28 No comments: