Here at JUST A BALL GAME? we are very proud to announce that our founder LINDSAY ENGLAND has been given a POINT OF LIGHT  from British Prime Minister Theresa May.

The Points of Light award recognises outstanding individual volunteers - people who are making a change in their community.

Below is the media release from no10.

1182. Lindsay England
Lindsay England, originally from Bradford and living in Manchester, is the founder of ‘Just a Ball Game?’, an LGBT+ organisation campaigning to kick homophobic, biphobic and transphobic abuse and discrimination out of sport. Lindsay, a lifelong Bradford City FC fan, originally started the organisation as a blog and then as a campaign organisation, which also project manages a women’s Futsal /5-a-side team locally in Manchester and the Bradford City LGBT+ Fan Group, a hub for LGBT+ supporters and non LGBT+ allies which aims to provide a safe space for fans and encourage greater inclusion in football and other sports.
‘Just a Ball Game?’ has since grown, aiming to raise the profile of LGBT+ people in sport and working with clubs and organisations at local and national level to promote inclusion.

This has included working with ‘Kick It Out’, the anti-discrimination in football campaign, and the Home Office to issue LGBT-inclusive advice to match-day stewards. Lindsay has also worked with the TUC to design a toolkit for union officials offering practical advice on tackling homophobia at club level, and with the FA to host a conference at Wembley earlier this year discussing the most pressing issues facing the LGBT+ community in football.

In a personal letter to Lindsay, Prime Minister Theresa May said:
“Through ‘Just a Ball Game?’, you are sharing a powerful message of inclusion and equality for LGBT people in sport. Nobody should feel excluded from a sport that they love and your commitment to eradicating homophobia, biphobia and transphobia is truly remarkable. I wish you the very best in your continued work.”

Lindsay said:
“Just a Ball Game? Was founded in 2010 because I wanted to be able to make a difference. The recognition through a Points of Light award is testimony to the hard work and dedication volunteers achieve when they are given support on their journey.
“Today’s LGBT+ celebrations are tomorrow’s LGBT+ history.” 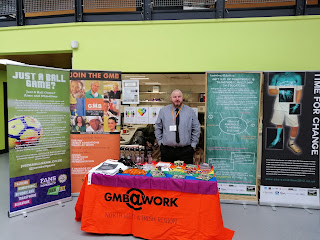 May 17th every year is International Day Against Homophobia Biphobia and Transphobia.
For many years in Germany, May 17 had been unofficially given the labeled as a sort of "Gay Day." Written in the date format 17.5., it had a natural affinity with Paragraph 175 of the Penal Code, the rule dealing with homosexuality.

The IDAHOBIT day, as a concept, was conceived in 2004. Frenchman Louis-Georges Tin was founder of the day, and acted as its Committee Chairperson until his resignation in September 2013. The date of May 17th was specifically chosen to commemorate the World Health Organization’s decision in 1990 to declassify homosexuality as a mental disorder.
The date exists as both a Worldwide celebration of sexual and gender diversities, and to draw the attention to the violence and discrimination experienced by lesbian, gay, bisexuals, transgender, intersex people and all other people with diverse sexual orientation, gender identities or expressions, and sex characteristics.

For 2019, JUST A BALL GAME? teamed up with trade union GMB as the North West and Irish region supported our event day at The Manchester College (TMC).

Equality, Inclusion and Diversity runs through the heartbeat of GMB trade union membership in workplaces and also within the movement itself. Recently the NW&I region has set up a self organised group (SOG) for members who identify as LGBT+ and also their allies, to drive forward this equality strand under their mission statement:

Through education we will raise awareness
Through campaigning we will challenge
Through tolerance we can be #StrongerTogether.

The group comes under the banner of GMB SHOUT! North West. 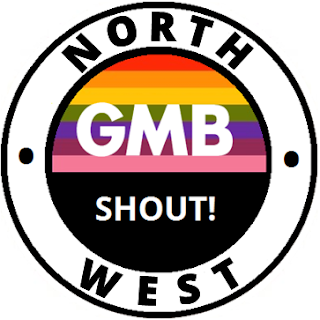 JUST A BALL GAME? and GMB NW&I partnered to spend the day at TMC Openshaw Campus where they delivered 2 presentations on LGBT+ inclusion and diversity, tutoring on how to effectively challenge homophobic, biphobic and transphobic bullying and abuse to over 40 students and tutors. There was also a basic introduction to the trade union work that is delivered locally for members, why young people are being encouraged to know their rights in the workplace, and how equality strands are supported.

Alongside of this both organizations hosted a stall featuring JBG?’s ‘TIME FOR ACTION’ exhibition panels and resources were handed out to staff and young people in attendance. Pledges were signed and ‘selfie boards’ shared to support the college initiatives for the day.

GMB NW&I region Equality Officer Lisa Ryan had the following to share on behalf of the partnership work for IDAHOBIT 2019:

“Here at the GMB we believe that equality should be at the heart of everything we do so it is vitally important to use dates such as this (IDAHOBIT) to really push home the equality message.”

“It's great to work alongside a grassroots campaign like Just a Ball Game? who promote awareness against homophobia/biphobia/transphobia and call out hate and intolerance, not just one day a year but all year round.”

“Our Regional Equality Forum, and LGBT+ Shout! North West group are proud to support Just a Ball Game? and the sterling work they do.” 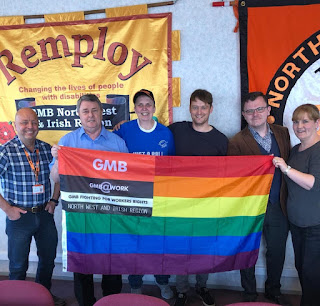