Kick It Out, football’s equality and inclusion organisation, has released a film featuring players from every Premier League club which seeks to promote LGBT+ inclusion in football and emphasise that homophobic, biphobic or transphobic (HBT) discrimination has no place in the game.
The short film features Premier League stars such as Tottenham Hotspur’s Jan Vertonghen, Chelsea’s Eden Hazard and Alvaro Morata, Manchester United’s Juan Mata, Manchester City’s Vincent Kompany and Arsenal’s Danny Welbeck.
LGBT+ inclusion remains a central part of Kick It Out’s work and the film encourages supporters to report any abuse they witness or suffer – whether it’s to a steward or to Kick It Out via its free reporting app.
You can view the film here: https://youtu.be/sdNKg_djon0 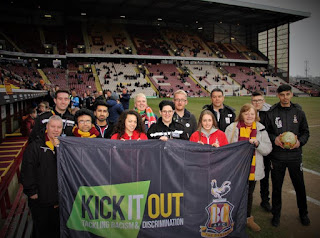 The film builds on Kick It Out’s work last year with the Home Office, True Vision and JUST A BALL GAME?  when the organisation released a series of informative resources that raise awareness of HBT discrimination within football stadia.
The resources included a comprehensive booklet and small pocket guide designed to assist stewards and safety officers in their understanding of HBT discrimination and how to effectively challenge this behaviour, as well as a short film following five individuals from the LGBT+ community who discussed the impact of abuse on their matchday experience.

You can view the film accompany the resources here: https://www.youtube.com/watch?v=X6M6dT3STek&t= 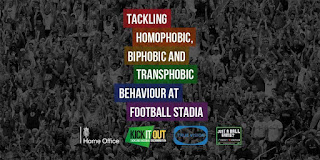 Roisin Wood, CEO of Kick It Out, was delighted to work closely with every Premier League club to produce the film and send a clear message that HBT discrimination is unacceptable in football and wider society.
“Kick It Out have been campaigning for LGBT+ inclusion in football for a long time and it’s wonderful that we’ve been able to bring all 20 clubs together for the first time in our history to take a stand against HBT discrimination. This is about the collective force of the game uniting to eliminate behaviour that has no place in the game.
“We also wanted to send out a positive message to fans across the world and make it clear that LGBT+ supporters are part of the foundations of football – just like any other fan.”
Bill Bush, Executive Director of the Premier League, gave his endorsement to the film.
“This film produced by Kick It Out features all our member clubs and highlights the need to challenge homophobic, biphobic and transphobic behaviour across the sport. The Premier League is embraced across the world and we are proud to show our continued support for LGBT+ inclusion in football.”
Posted by JUST A BALL GAME? at 21:13 No comments: 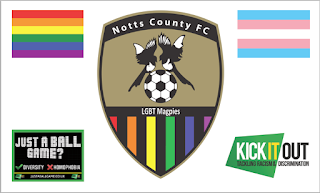 New team JBG? member on board.

Just A Ball Game? would like to welcome on board Steven (Ste) Grocock to our team as Midlands Officer.
Ste is a Notts County fan who is dedicated to equality in sports.Growing up in the midlands and later spending time in north America Ste is also a fan of ice hockey.


Check out the notes on Ste and the other JBG? team members here:

http://www.justaballgame.co.uk/team-jbg
Posted by JUST A BALL GAME? at 20:03 No comments: