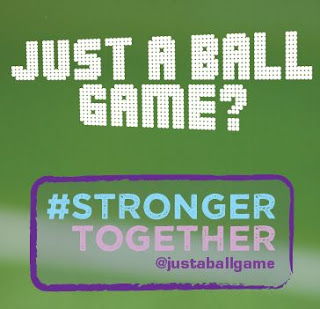 On the eve of our eighth birthday, JUST A BALL GAME? (JBG?) proudly announce their first ever seminar #STRONGERTOGETHER  which will be hosted by The Football Association (FA) at Wembley Stadium on Tuesday 5th February 2019.

The event is supported by GMB Trade Union, The Professional Footballers’ Association, UCFB, KIO and others, and will see a day of interactive workshops, networking, guest panel speakers from football clubs, fan groups, players, referees, coaches, education establishments, the police, media, and other sports organisations coming together to showcase the great partnership work done in collaboration with JBG?

Further details on this free, event will be released shortly. Tickets will be booked via Eventbrite: https://www.eventbrite.com/e/strongertogether-tickets-52180212420

"Delighted that this event is taking place, and at Wembley. It justifies years of hard work at  grass roots to raise the issue of anti-LGBT+ prejudice in football, and I am honored to have been asked to take part". Dr Peter Purton, TUC LGBT/disability officer (retired).

Keeley Baptista, Kick It Out Programmes Manager, said: “Just A Ball Game? have worked tirelessly for LGBT+ inclusion in football since 2010 and we’re proud to be a long-term supporter of their work.
“The #StrongerTogether relaunch at Wembley promises to be an important day of discussion and workshops on LGBT+ issues, and we look forward to seeing how JGB? use it to build on their successes over the last 8 years.”

Lucy Clark says: “I love the work that Just A Ball Game? do and fully support them. Football and all sports should be enjoyed by everyone and just because a person is a member of the LGBT+ community they should still continue doing what they love without prejudice.”

“ As someone who very nearly gave up doing something I love because I am transgender, I appreciate the work the Just A Ball Game? are doing as quitting should not have even crossed my mind. I am honored to have been invited to talk at this event and look forward to meeting you all.”

Amrit Singh Bains had this to say,” It’s an absolute honor to attend the day  as a guest speaker. I am really humbled for this opportunity to use the game of football to unite, inspire and empower our communities.”