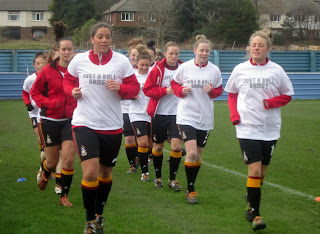 Just A Ball Game? very proud to have The Bantams Women's team as a partner club.

Bradford City Women's Football Club provides opportunities for women and girls of all ages to train and play football at the highest possible level in the English football leagues.
The team are one of the biggest women's football clubs in the area and welcome players of all ages and ability and is run by a willing band of unpaid volunteers. 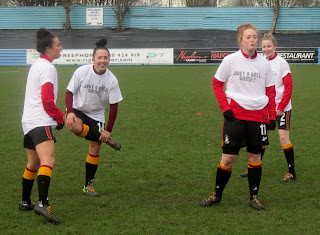 They play under the name of Bradford City Women's Football Club, although they are financially independent from Bradford City FC. The club have to raise all their own funds to enable the players to train and play at the very top of their chosen sport. Each player pays to play and has to combine working in their normal day to day jobs or studies, and the considerable demands of training twice a week & playing matches on a Sunday across the country. Lindsay England founder of Just A Ball Game? says:
" TEAMING UP WITH BCWFC GIVES JUST A BALL GAME? A CHANCE TO SPREAD THE WORD ON OUR CAMPAIGN WORK WHICH SEEKS TO RAISE AWARENESS AROUND LGBT+ INCLUSION AND VISIBILITY AND ALSO CHALLENGE WHAT IS SEEN AS HOMOPHOBIA OR ANTI-GAY."

"WE HAVE ALREADY SEEN THE MEN'S TEAM SUPPORT OUR CAMPAIGN FOR SEVERAL SEASONS NOW AND WE ARE VERY MUCH LOOKING FORWARD TO PARTNERING WITH THE WOMEN'S SQUAD TO SHOWCASE HOW SERIOUSLY FOOTBALL IN BRADFORD IS AROUND EQUALITY AND DIVERSITY.

"JUST A BALL GAME? WOULD LIKE TO THANK EVERYONE AT BCWFC FOR THE PARTNERSHIP  WHICH SHOWS SUPPORT FOR THE IMPORTANT WORK WE ARE DOING AND THE REAL DIFFERENCE WE ARE MAKING IN CHALLENGING DISCRIMINATION WITHIN THE GAME."

"WE HAVE A HUGE INTEREST IN THE WOMEN'S GAME AND ARE VERY GRATEFUL FOR THE RESPECT AND ACCEPTANCE IT BRINGS TO YOUNG PEOPLE." 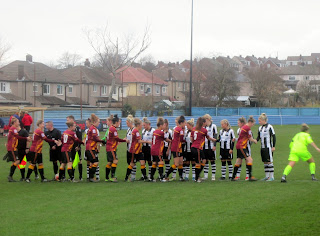 1989: The Club becomes a founding members of the Yorkshire and Humberside Women's League, winning promotion from Division Two, runners up in the Yorkshire Plate and reaching the semi-finals of the knockout cup.
LINK to CLUB: http: //www.bcwfc.co.uk/
Posted by JUST A BALL GAME? at 21:52 No comments: