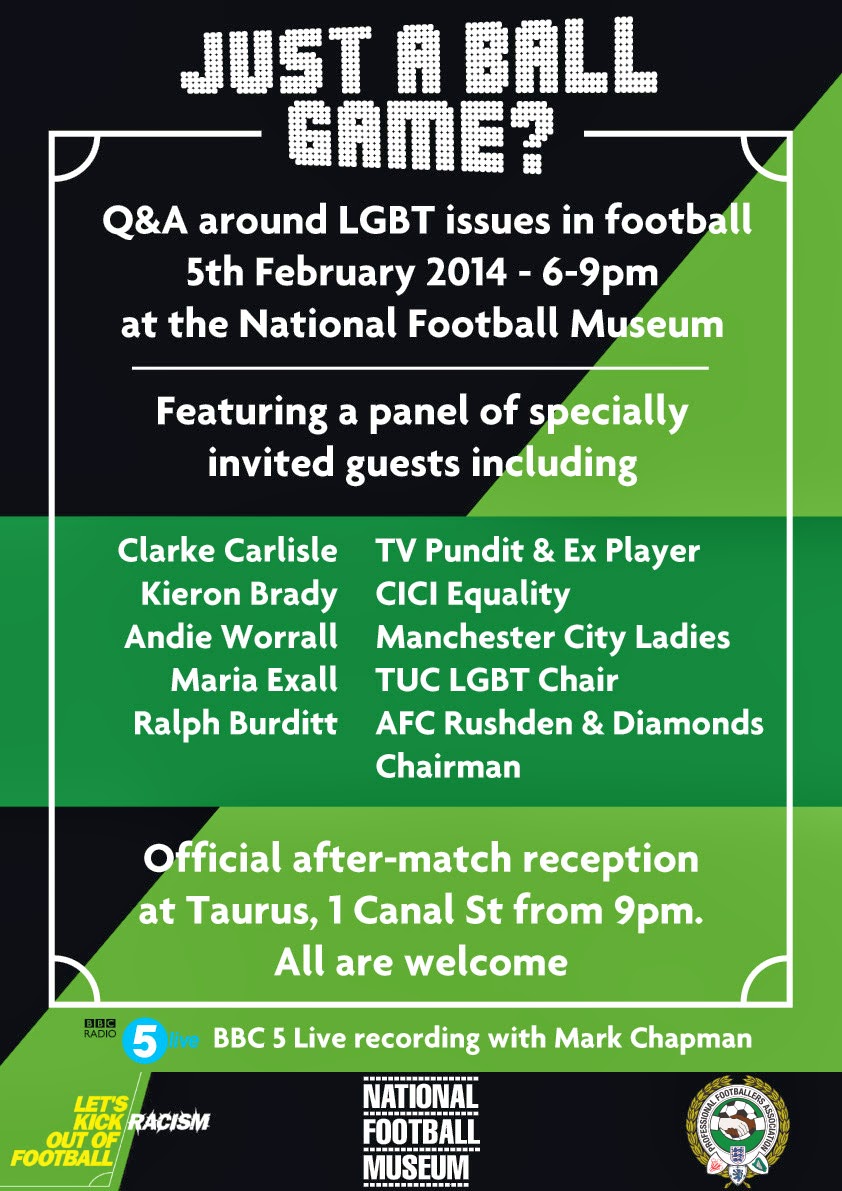 This a Q&A session and debate on homophobia in football and other sports with our patrons Clarke Carlisle,( Andie) Andrea Worrall, Maria Exall and Kieron Brady and guest speaker AFC R&D chairman Ralph Burditt, and Gainsborough Trinity's Liam Davis.
.For more info on our patrons :http://www.justaballgame.co.uk/patrons
The event is in partnership with The Professional Footballers' Association and Kick It Out
The event is to be recorded by the BBC for 5Live to air a few days later and will be hosted by Mark Chapman.

The evening Q&A will take place between 6pm and 9pm on Wednesday 5th February in the Atrium of the museum close too our exhibition.The first floor of the museum  and our exhibition will be open to guests and public with tickets from 6pm-6.45pm, and refreshments will be served during the 2 recording slots.

Official reception and social at Taurus Bar no1 Canal St.from 9pm.
We will be selling raffle tickets at the event to be drawn at Taurus Bar, prizes include a signed item from MCLFC, signed Monty Panesar shirt, Harrods Wedgewood tea set used in a photo shoot  by the most decorated female tennis player of all time, Martina Navratilova!

Other guests to be announced shortly.
Please print your tickets to gain entry to the events. 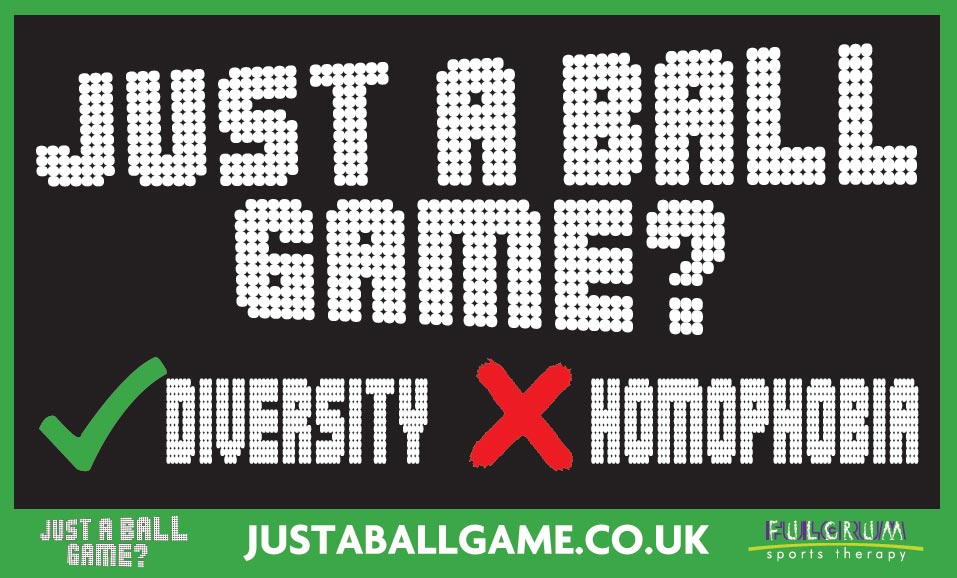 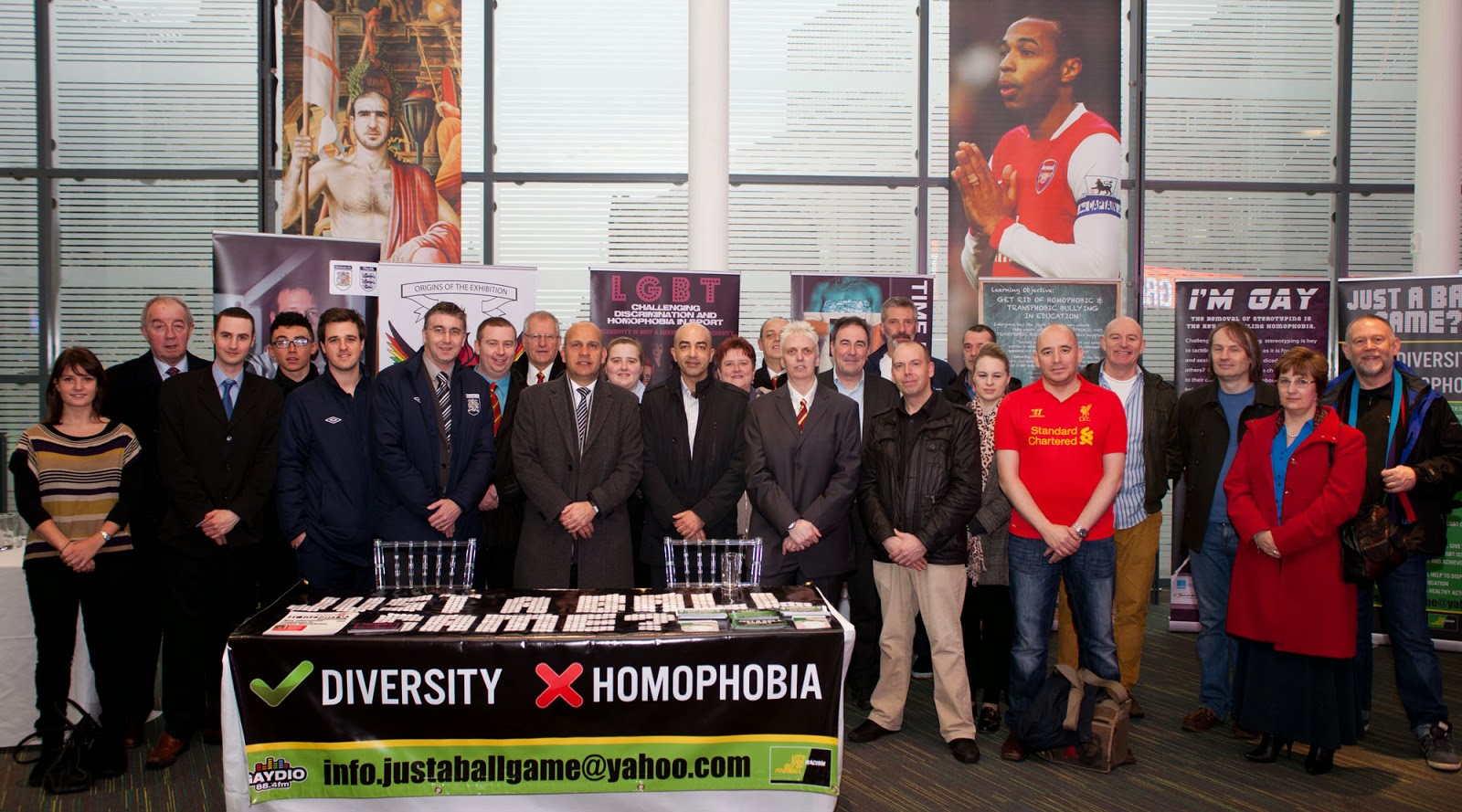 We at Team Just A Ball Game? are very proud to announce that from 1st-6th February 2014 our  pop-up exhibition will be available for public viewing at the NATIONAL FOOTBALL MUSEUM housed in the Urbis Building, Cathedral Gardens, Todd St, Manchester, Greater Manchester M4 3BG .tel-0161 605 8200.

As an extra to this exhibition JBG? will also host a Q&A event evening in partnership with The Professional Footballers' Association and Kick It Out on February 5th, from 6pm -9pm (the museum will open the 1st floor to visitors from 6pm-7pm) and which will be recorded for BBC5live.Tickets which are free can be ordered from here:

Campaigns organisation Just A Ball Game? which looks at homophobia and other issues faced by Lesbian Gay Bisexual and Transgender (LGBT) people who participate in varying ways in football and other sports is proud to bring you this pop-up exhibition which uses a variety of visual educational boards which aim to raise awareness around LGBT issues and homophobia while at the same time being a visible insight to people who are an ‘out and proud’ part of an LGBT community.

Committee member of JBG?  Alan Mercel-Sanca  says, “Whether gay or heterosexual, it is not enough to passively absorb awareness of the many cruel and psychologically disturbing acts of homophobic bullying – this is a recipe for depression or worse. What is required to effect real change and release from such a vicious circle is that the sources of homophobia be fully identified, recognised, and seen for what they are: that those who in consequence are influenced by them and cause so much harm, are also seen for what they are – incomplete and easily influenced people.”

Sport as a whole at present only touches on diversity and inclusion for those who identify as LGBT, and although a number of LGBT people are involved in sport at grass roots level are ‘out’ to family, friends, team mates and club officials, those who participate at elite level and are ‘out’ publicly are few and far between.

Founding director of Just A Ball Game? Lindsay England says: “We hope to make use of the wonderful and dynamic exhibition as part of our on-going campaign work to raise awareness around homophobia and help mainstream sport to be more inclusive of a number of diversity issues and help create a safe space for both LGBT people and those who are perceived to be ‘LGBT’ to achieve their potential. The education element of this exhibition encourages an understanding of issued faced by LGBT people and at the same time highlights role models for a younger generation to aspire too. 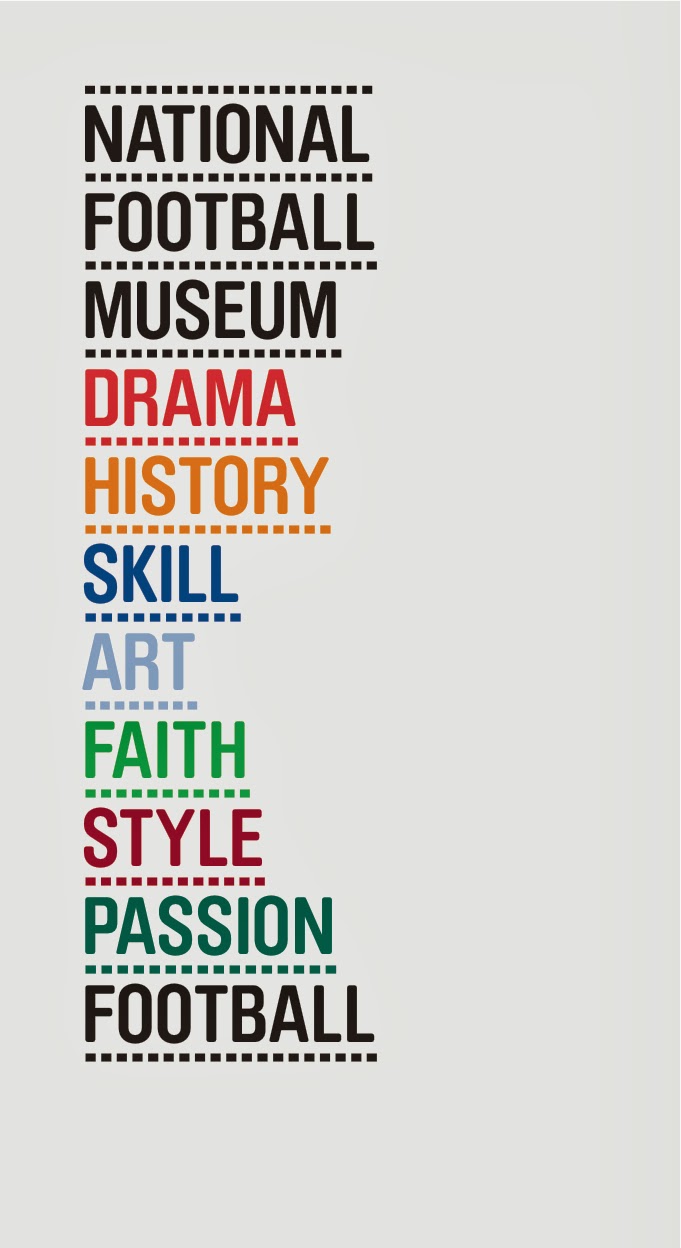 The National Football museum was founded in 2001 by Kevin Moore (Director), Rob Pratten, Mark Bushell, Hugh Hornby and Lynsey Jones (Exhibition Curators/Researchers/Exhibition Authors). The museum's first site was outside Deepdale, Preston, Lancashire. Deepdale was particularly significant as it is the oldest continuously used football league ground in the world. The museum's president is World Cup winner Sir Bobby Charlton.
In 2003 the museum and the University of Central Lancashire established the International Football Institute to conduct research into historical, social and cultural aspects of football. In December 2008, chairman of the Football League, Brian Mawhinney caused controversy when he suggested that the Museum should be moved from Preston to Wembley Stadium in order to attract more visitors. Founder Kevin Moore, stated that it had been an aim to have an exhibition at Wembley,but stated that the trustee's policy was to have its headquarters in Preston.
Despite critical acclaim and attracting 100,000 visitors per year, funding was repeatedly an issue. The trustees were concerned about the museum's long term future. In 2009, they approached Manchester City Council about moving the museum. The city council offered a funding package worth £2m per year for the museum to move to Manchester. The museum reopened in Manchester on 6 July 2012. It is hoped that the new museum will attract 350,000 visitors per year. It was reported in August 2012 that the new National Football Museum attracted over 100,000 visitors in the first six weeks of opening. By the end of April 2013, the museum reached its 350,000 target.