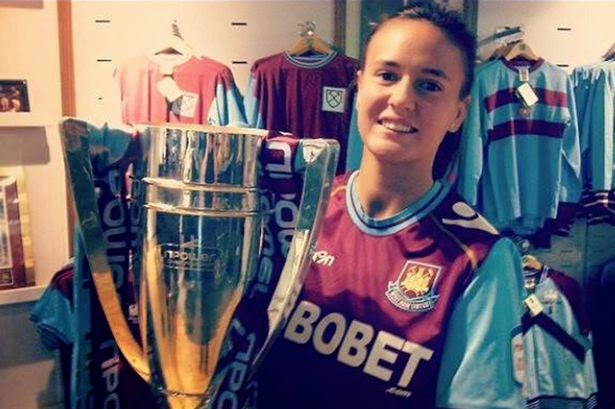 It was with great sadness earlier this year that we at Just A Ball Game? received news of the death of West Ham United Ladies player Katie Sheppard aged just 20.

It is with even more sadness that we now learn a few months on confirmation that the young football talent had taken her own life and the possible reason behind this following a coroner’s inquest.

We would like to express our sincerest condolences to Katie’s family, extended family, friends, team mates/former team mates and work colleagues, and hope that their treasured memories will of her will never leave them.

The rising star of women's football was found hanging days after a row over her girlfriend's refusal to tell her parents about their relationship, an inquest heard. Reports go on to  say: PC Alex Giacomazzi said he told the inquest: "I learned that Katie was openly homosexual and her family and friends had accepted that. "I found out she had a girlfriend, I was worried that there may have been some sort of pact and they did it together." A diary found in her bedroom contained a hand written suicide note with the message: "God forgive me, I sacrifice myself to you and to your kingdom."

Founder of Just a Ball Game? Lindsay England said: “For far too long now many people from within an LGBT community have asked football authorities to take issues around homosexuality, homophobia, LGBT inclusion and visibility seriously and bring about education into the game as early as possible to try and avoid another ‘Justin Fashanu’ situation happen again.” “Although football alone is not to blame for someone’s taking of their own life, and so young, I feel we need to do much more than pay lip service to the amount of homophobia that does exist within the game and also reach out in as many ways as possible to create a safe space and welcoming environment where those, who as talented as they may be at football or indeed any sport, could be extremely vulnerable in other aspects of their lives and feel isolated and alone.”

Both the grass roots and professional side of the game takes on a certain amount of training for Welfare Officers, but mostly these are volunteers and are not always people with enough qualifications or experience in handling extreme circumstances and recognising certain signs in the early stages, and often are not given enough information to even sign post for help and support elsewhere until it’s too late.

Football needs to step up and bring about clear changes and have the right people on board with the correct experience and knowledge around the vast diversity of the LGBT community who especially young vulnerable people need to see as part of their everyday life.
It’s often said that the very few players who are ‘out’ within in the game have done so through their own personal choice, likewise those still closeted have made the opposite choice. What if it’s more important than just that? What if we look at the bigger picture? No one or very few players come out and we have an environment where the situations are never any better, and issues that need fighting never get solved?
Young players have their role models, and young LGBT people need to know that yes they are a little different to some of their friends or family but there are many people out there in the big wide world who they can see are just the same as them. More also needs to be done to provide support and help for those struggling to come to terms with aspects of their lives.

From evidence and statistics found by our team at our Just a Ball Game?  we would like the following facts to be taken into account:
Over half LGB secondary school pupils are victims of homophobic bullying in school and 21% of them do not feel accepted.1 in 4 trans people experience physical abuse in school. Some 38% of LGB people experience a form of domestic abuse in a same sex relationship. LGBT people are twice as likely to commit suicide.
Help support and information can be found here: