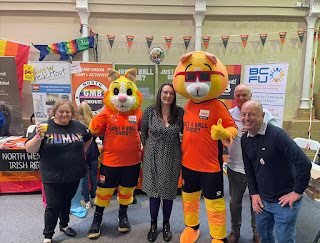 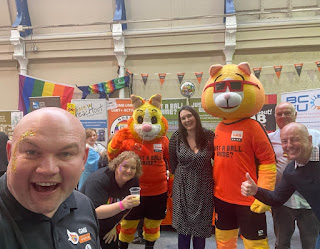 JUST A BALL GAME? (JBG?) was established originally under another name and as a blog in 2009. In response to the ever increasing amounts of homophobia, biphobia and transphobia in football and others sports there quickly became a need to expand on the awareness and raise visibility of LGBT+ peoples participation in all areas of the sporting industry and a year later the non-profit organisation was created as it is today. 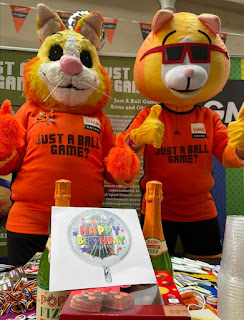 Founder - Lindsay England a GMB trade union activist, has given up more than 15,000 hours of her free time, unpaid, to grow the charitable cause.

Lindsay said: “It’s amazing to reach this milestone. I would never have imagined when I first started the blog and then the campaign organisation that it would grow in the way it has.” 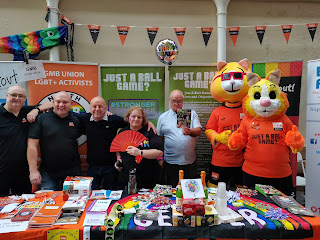 Tweleve months ago JBG? released documentation from their survey.

O   Only 58 out of 133 who responded to the question ‘’Do you feel satisfied with the responses you got when you reported the homophobia, biphobia or transphobia?’’ felt that the response they got after reporting the bigotry was satisfactory. This figure highlights the need for further sensitivity and improvements.

.         Findings underline those across the survey in highlighting modest improvements in the landscape but still much work to be carried out given that the prevalence of LGBT+ discrimination continues to be high. 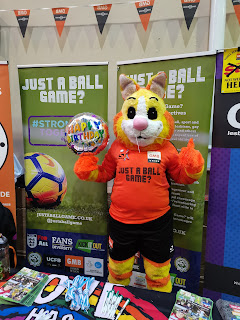 JBG? have no core funding and exist on donations and small funding amounts. You can support the education work through purchase of resources here: http://www.justaballgame.co.uk/shop

GMB TRADE UNION- An Introduction to Just A Ball Game?

An Introduction to Just A Ball Game?

Just a Ball Game? (JBG?) is a grassroots campaign organisation with international reach which has a strong focus on football/sport, art, music and event days. JBG? was founded in 2010 by GMB NW&I member Lindsay England.

Football - and any sport - is a workplace just like any other you will find in society. It’s not just the players, managers/coaches or officials that can earn a living playing the beautiful game - a stadium alone can provide an umbrella for a number of different industries.

Office and ticketing staff are employed along with merchandise sellers, caterers, cleaners, security, safety stewards, technicians, writers, journalists, engineers, joiners and other crafts persons, electricians, grounds personnel, drivers… the list is endless - all coming together to make a special event happen around one 90-minute performance.LGBT+ people exist in all these roles, though they may not be obvious for a number of personal or practical reasons. Much like members of a trade union movement, comrades in arms one and all - but not always displaying their true self for fear of resentment and rejection.

JBG? often delivers educational workshops, charity sporting events, Q&A sessions with our patrons and conferences as either standalone events or in partnership with our supporters or LGBT+ allies.

In doing so we can reach out to LGBT+ people and their friends, raising awareness and visibility of LGBT+ inclusion. Our campaign also challenges homophobia, biphobia and transphobia and educates through tailored presentations and meaningful resources striving to dispel myths and change mindsets.

The majority of this work, subject to funding, can be accessed and completed in partnership with JBG? all year round due to need, as sadly homophobic, biphobic and transphobic bullying happens every day. Many of our inspiring interactive sessions and presentations happen during our partnerships with trade unions, where we can focus on workplaces and education establishments at the heart of local communities. 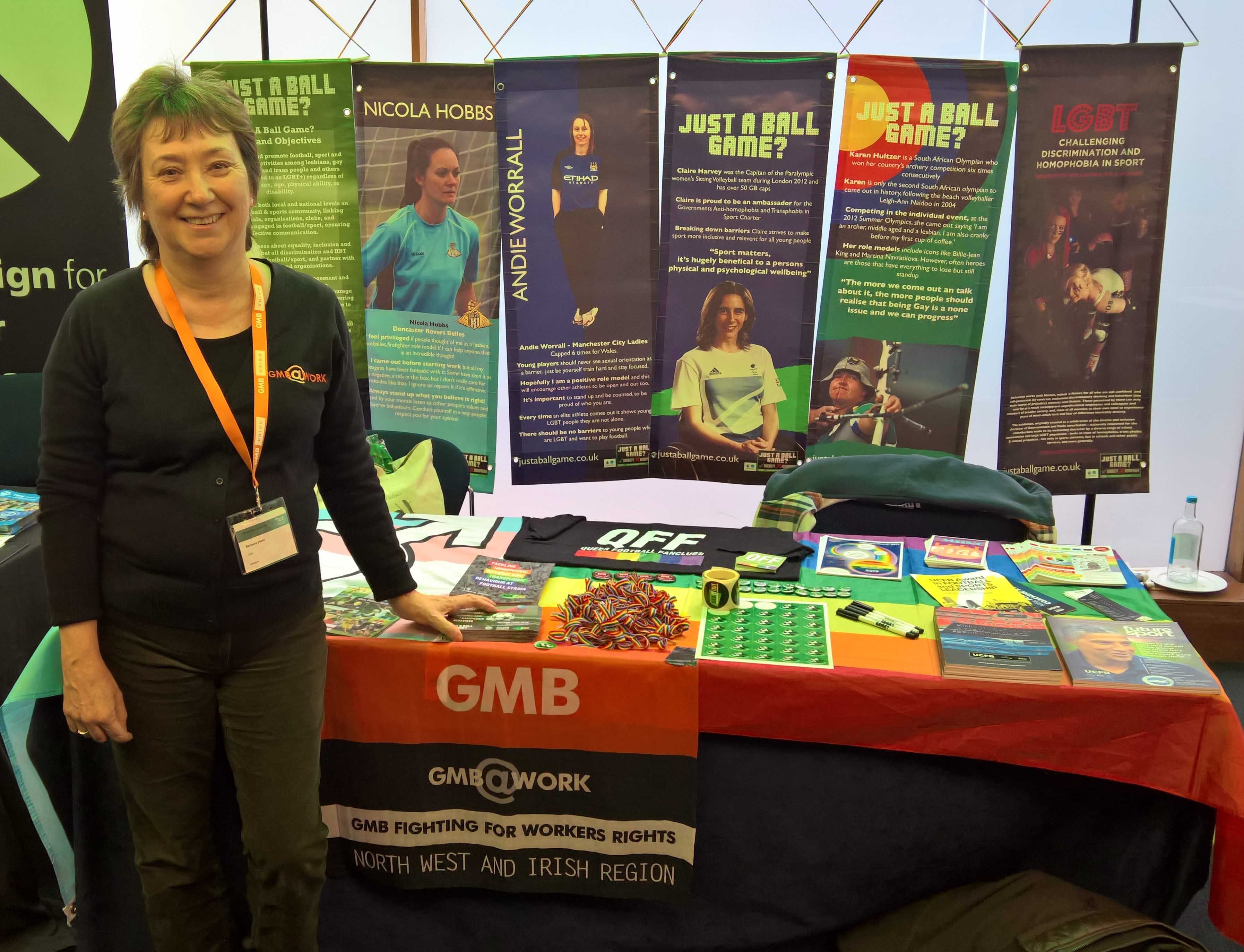 In the past decade with the help of a heavy social media presence, our workload has been seen across the UK and has expanded around the world. Along with raising awareness, the campaign has a strong focus on challenging inequality and implicit bias.

Our four key campaign initiatives are TIME FOR ACTION - THINK BEFORE YOU CHANT! - OUT, PROUD AND KICKING - STRONGER TOGETHER. Through these, and some forward thinking strategic work with other inclusive sporting organisations, JGB? seeks to challenge the stereotypes and misconceptions that exist around Lesbian, Gay, Bisexual & Trans people and others (LGBT+) and work towards a future where the visibility of LGBT+ people in football and other sport is accepted and celebrated, whether they are participants or supporters of the game.

To actively challenge any form of prejudice and discrimination on the grounds of sexual orientation or gender identity we provide interactive, open and honest workshops that look at what it means to be LGBT+, raise the profile of the LGBT+ sporting arena and discuss the damaging impact and effect of homophobia in sport. 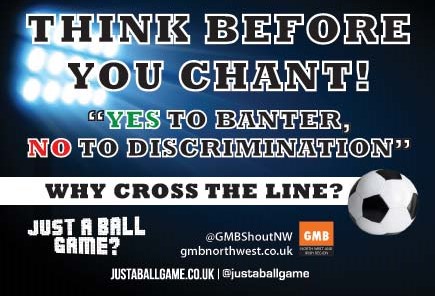 How can GMB members help?

There are a number of ways in GMB members and workplaces can help us expand our partnership work and reach even bigger audiences. Invite us along to do Q&As or presentations for your GMB equalities groups across all strands.

Invite us along to your workplaces, branch meetings or recreational events. Have us as guests on your website or blog. Follow us across social media and retweet and promote our posts. Help us make the changes at government level to keep LGBT+ people safe and feel included.

In doing so you can help us to:

GMB and JBG? delivered Stronger Together Online – an event for Pride month June 2021. 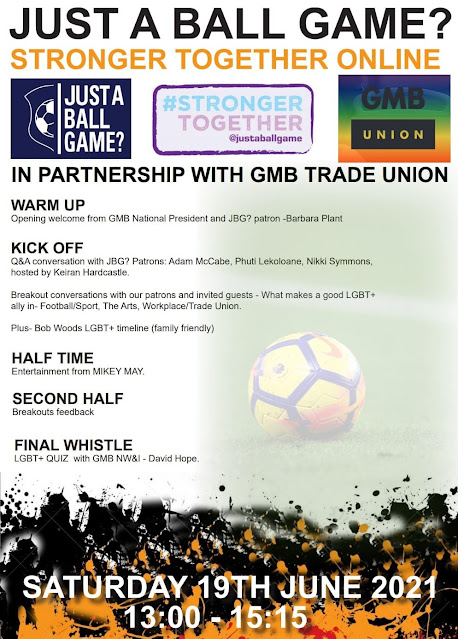 The event will contain a Q&A session with 3 of JBG?’s global patrons who are sports people. The conversation will be driven by Kieran Hardcastle and this will then be followed by breakout sessions which will also feature our patrons and other invited guests, those who sign up to the event will have the opportunity to participate. One of these sessions will be family friendly. The theme of the day is ‘What makes a good LGBT+ ally.’

Entertainment from singer Mikey May, and a fun LGBT+ themed quiz will also be part of the afternoon presentation.

LGBT+ activist and podcaster Richard Dunbar, on speaking of the importance of solidarity from allies giving their support for LGBT+ communities coming in these Covid-19 times says:

“Never has it been more important than now to show solidarity with an LGBT+ community at a time when not only have many been isolated, but also because hate crime against LGBT+ people has been on the rise.”

“Having allies who lead by their actions in the workplace and wider society in general is essential.”

If you wish to be part of this event, please register at: https://gmb-org-uk.zoom.us/meeting/register/tZwsf-mvqTwiHdBRgEDLEMBWv_8miQ7Yn5CI in order to attend. 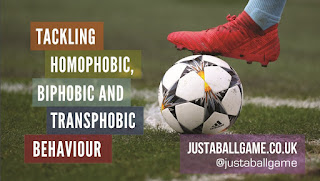 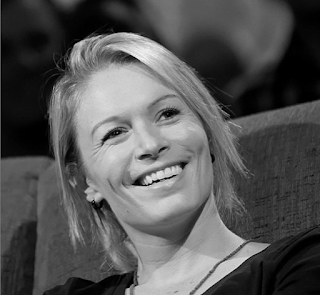 JUST A BALL GAME? (JBG?) are delighted to announce that former Irish International Hockey Captain Nikki Symmons has joined them as their latest patron.

Symmons had an illustrious hockey career playing 208 times in emerald green across 12 years and in doing so became the most capped elite Irish athlete. Field Hockey wasn’t the only sport embraced by the talented Dubliner as there were several international caps earned at Cricket and Nikki was by all accounts quite formidable with a tennis racket too! 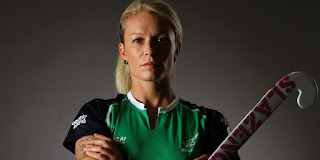 Recently she has immersed herself in a media content profession with International Hockey Federation (FIH) and more recently Philip Morris International, and has become a leader across global platforms inspiring females and LGBT+ people alike breaking down stereotypes while educating on all things equality inclusion and diversity.

Nikki was out to friends, family and team mates for a number of years prior to publicly ‘coming out’ in 2014 and yet there was still reluctance in doing so.“Do I say anything?”

“Then I thought about how if I could help just one person to be comfortable with themselves and just to be them, that it would be an accomplishment in itself.” 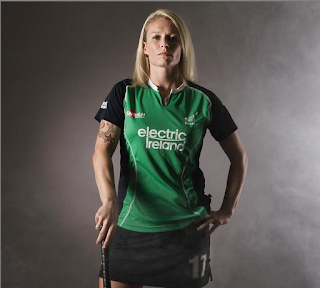 Symmons goes on, “If any of the journeys I have been through in my life, be it sport or personal struggles can inspire people, I will do my very best to continue to do this.” Maintaining, “I see many people struggling to come to terms with their sexuality, so felt to talk about it was the right thing to do.”

Lindsay England founder of JBG? says, “ We feel honoured to have someone with a natural aptitude for both sports and business as Nikki’s on board as one of our patrons, and we will endeavour to showcase these qualities which Nikki seemingly portrays quite effortlessly.”

On becoming a JBG? patron Symmons says:"It is very important to me to use my platform to raise awareness for the whole LGBTQIA community. I am very grateful for this opportunity to share my thoughts on the many difficulties that our community are facing today". 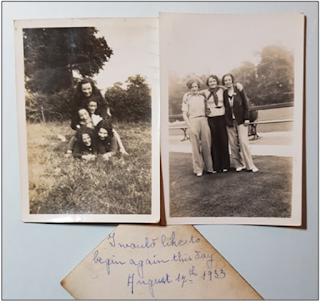 As part of Women's History Month and our International Women's day focus leading up to 8th March, here at JUST A BALL GAME? we

would like to offer you this read and link to the full article from our friend, historian

We would also like to give thanks to Margaret, editor-in-chief of

These beautiful words bring a tear to my eye. They were written to my granny Lizzy Ashcroft by French Footballer Andree Gaukler. On the top left we see: Lizzy Ashcroft, Friend, Andree Gaukler, Margaret Thornborough and Lily Parr. On the top right we see: Margaret Thornborough, Carmen Pomies and Lizzy Ashcroft. The amazing photos above show my granny mucking around with her football mates without a care in the world. Two words spring to my mind: JOY and FREEDOM. My granny had a hard life and I was so overjoyed to find this treasure trove of photographs and witness the good times she had in the 1930s. I wrote an article recently about her friend and captain Lily Parr. The Lily Parr 'nonsense industry’ is out of control and at times is very disrespectful to one of our top athletes. This is my short tribute to my granny’s old mucker…