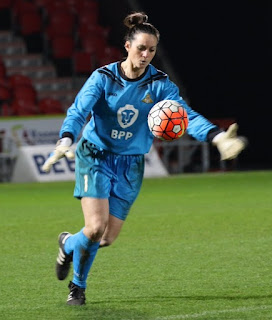 Here at JUST A BALL GAME? (JBG?) we are very pleased to announce Doncaster Rovers Belles  goalkeeper NICOLA HOBBS as our latest addition to our patrons.
Born in Portsmouth Nicola’s family moved to Lincolnshire for her primary and secondary school years, it was here as a teenager she became aware of her sexual orientation. “I was aware that I fancied the same sex at an early age but was confused and didn't express this fully till I was 16.”

Football is only one of Nicola’s skills her full time job is that of a fire-fighter.
Nicola says. “I came out before starting work but all my colleagues have been fantastic with it. Some have seen it as a negative and say I am a tick in the box but I don't really care for attitudes like that so I ignore it or report it if it's offensive.”
“At the ‘Belles’ all my team mates are amazing with it as they are friends and I am who I am, just like they are, and I wouldn't change any of them.”

Nicola had this to say about becoming a figurehead for the campaign organisation. “It's a massive privilege to be a patron to JBG? it is a very important cause and support mechanism that could change people's lives. It's an honour to have been asked.” 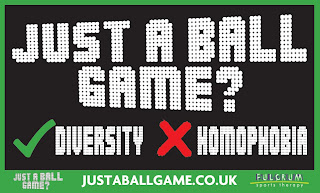 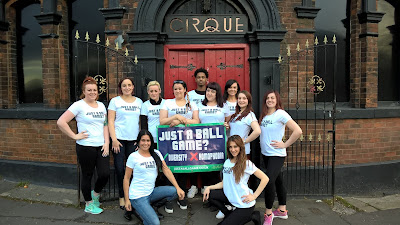 With customer bookings coming from varied communities and cultures embracing the North West's attitude of open-mindedness and acceptance, the management team, bar staff, dance troop and security at Cirque are proud to come on board and show inclusive visible support for the work and campaign initiatives delivered by JUST A BALL GAME?


Owner of the venue showcasing the unique and exciting experience Irene Kinsella says:
"Here in Manchester the Lesbian Gay Bisexual and Trans (LGBT) community is no longer a niche consumer segment but an influential group whose voice grows stronger with LGBT culture becoming a driving force of the city's mainstream nightlife."
"At Cirque we are recognising the importance of championing equality and diversity within the entertainment industry, and also raising awareness and valuing the contribution a diverse workforce brings"

Cirque La Vie is a weekly Saturday night event through until 1am.This show provides the ultimate in entertainment, with no two weeks ever the same. The in-house dance troupe constantly brings audiences new routines and different aspects to the show, alongside guest’s favourite acts. The venue also holds regular burlesque classes to get you in the mood for show time, with celebration packages available – guaranteed fun and frolics from start to finish!