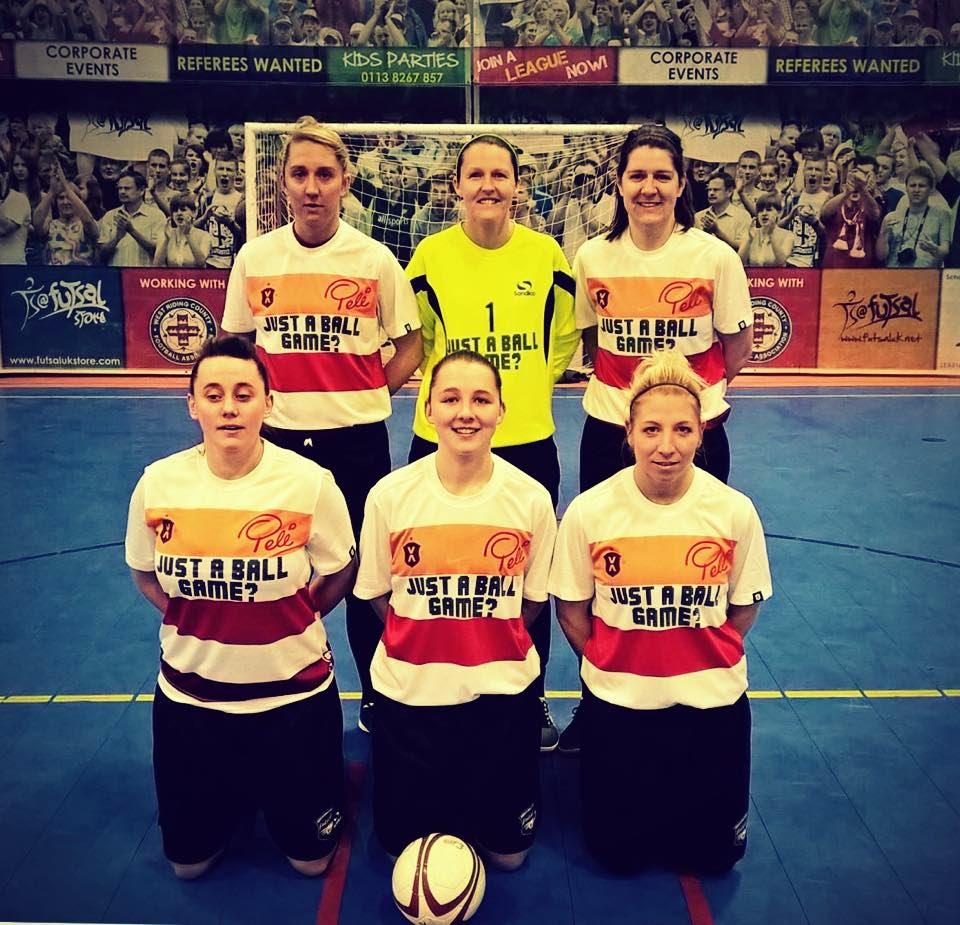 After a marathon 20+ week league season JBG? Ladies Futsal Team secured a place in the FA North Semi Finals of the Futsal Cup. The team were placed in Group B alongside Liverpool Futsal Ladies, Middlesbrough Ladies FC and Loughborough and finished as group winners and now progress to the FA Futsal Cup Finals which will be played in London in June at the iconic Copper Box Arena home to many of GB's Olympians in 2012.

The JBG? Ladies narrowly lost their first game 2-3 to Liverpool Futsal Ladies and were disappointed that this was due to a refereeing technicality, the JBG? team dominated possession throughout with Chantelle Parry scoring a brace.
Next up were Loughborough who had hit 5 in their opening game. Once again JBG? controlled the game, this time team manager Steph Ashton-Smith popping up with a fine hat trick and Ali Hindley adding a forth. The Loughborough team worked hard with a 2v 1 upfront to close down the scoreline but JBG? earned 3 points with in the end a comfortable 4-2 win.

So, with all 4 teams on 3 points each there was a big 'cup final' to be played out in the last game between FA WPL team Middlesborough Ladies FC and JBG? with a win needed to progress.
The 'Boro Ladies started strongly and raced into 3-1 lead at half time. It was the JBG? indiscipline letting them down with them being reduced to 4 players when Ali Hindley was ordered from the field of play after receiving 2 yellow cards in quick succession. The JBG? Ladies dug in and forced the score back level to 3-3 with just a further 4 minutes left on the clock. As the team were about to call a time-out keeper Leanne Ashton-Smith made a fantastic double save but in doing so was knocked unconscious and play was help up for several minutes while treatment was given. Ashton-Smith was deemed fine to continue and the game was restarted.
The JBG? Ladies pushed forward at every opportunity and brushed the woodwork on no less than 3 occasions. Then with just 1m 49 seconds left on the clock, the pressure was rewarded and defender Melissa Cook found inspiration and in turn the back of the net to make the final score 4-3 and JBG? Ladies were had booked their place in the  FA Futsal Cup Finals 2015.
Posted by JUST A BALL GAME? at 17:14 No comments: