FAIR PLAY? RESPECT? any chance of the FA doing what they preach?- DOUBT IT!

A short run down of the women's game here in the UK for those who are alien too it. 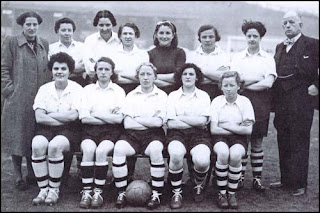 1895 Is deemed to be to year of the first ever ladies game on record with North beating South 7-1.
1920 Is according to the FA when the first ever International fixture took place,Dick Kerr Ladies v Paris with a 2-1 score and 25,000 in attendance.
1920 See's the record attendance for a women's game when 53,000 watched Dick Kerr Ladies beat St Helen's Ladies 4-0.( Hot shot Lilly Parr (who lived with her partner Mary, but was very reserved about this and her sexuality) is on record as scoring 967 career goals, and at aged just 14 netting 43 times in her first season for DKL!)
1921 The FA decide to BAN women from playing on football league grounds stating: "The game of football is quite unsuitable for females and ought not to be encouraged."
1969 The Women's FA is formed with 44 member clubs.
1971 The FA Council lift the ban on women playing on FL grounds.
1972 The first ever official women's International game in UK takes place when England beat Scotland 3-2.
1983 Women's teams are invited to have same affiliation as County FA's.
2007 The dominance of the English women's game sees Arsenal also triumph in Europe as the first ever UK winners of the UEFA  Women's Cup (now the Champions League).
2011 The formation of the elite Women's Super League. 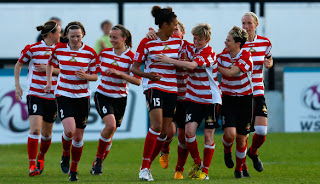 Doncaster Belles have been part of the transformation in women's football since 1969 and have been one of the elite top teams(second only to Arsenal in recent times) for over 20 years in which they have won over 20 league and cup titles.The Belles are and have been in the current WSL set up since its inception in 2011, and 1 game into this season the FA say they will not be granted a license to play in WSL for 2014!

The FA introduced the new 'Game Changer' initiative to take women's football to a more stronger footing  for 2014-18  with a new 4 year license for teams and in doing so stated the whole selection system would be open and transparent, and will be conducted by both Independent and FA reps.The ere would also be a new ground grading system in place, WSL1 teams had to have ground grading 'C' and  WSL 2 grading 'd' and 'e' as a criteria to be met.

So we are now seeing the reasons behind why, Doncaster Rovers Belles Ladies FC have had their appeal turned down and face relegation from the top division in the English women's game.It's difficult enough to take in the relegation for the girls themselves, the club and the fans, but the reasons why, are well disappointing to say the least.
What is this reason,we believe its the fact that the Belles are 3rd in line behind the men's team and RL team in booking a fixture at the Keepmoat!
And the FA have also not given two hoots about the effect on the women's game as a whole, its hardly giving the game the help, back up and support it deserves by making a mockery of the promotion and relegation systems, clubs achieve on merit.
Also other clubs notably Manchester City Ladies FC who have been given the thumbs up in the Belles absence. 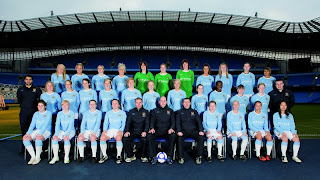 What's it got to do with 'City Ladies' you may ask? Well they are under fire from criticism from all around for simply been given the status of one of the 8 teams who will kick off the WSL 1 in 2014 in place of Doncaster RLFC, due to the fact that Manchester City mens team have a financial backer who is one of the richest people in the world, and want to dominate and control football with this wealth, except this isn't at all,its very different from how it seems from the outside.
A number of fans are feeling that dominance in the mens game in recent years with titles and trophies,has given the Ladies team an advantage.But, this is simply not the case.

The Ladies team at Manchester City have to go through the same pitfalls as any other of the women's teams, the main one being they have not even earned a wage for playing under such a prestigious footballing name, and sign on fees, home and away kit, boots for the season sees them as individuals pay out a minimum of £250 a season just for the basics to play.

Then,as do all but those centrally contracted players who are on International duties, who have a semi-pro wage they have to work full time during the week to earn a living,and fit in as much training as they can giving up their spare time, social engagements, and family life in the lead up to a fixture to ensure they are at their best.Then return home from away fixtures well gone midnight early doors next day, and try get some sleep before dawn and back to the reality of a full time job.
Training also is on the certain nights allocated to them when the 'city' first team, reserves, academy etc are not using the facilities.Oh and don't forget the training kits,they either have to buy themselves to fit properly, or use XL size hand me downs and there have been no such luxuries as a bench coat for you if substituted.
Hardly a glamorous life style of an elite athlete associated with their MCFC male counterparts is it?
Not to mention poor conditions of digs they have to stay in at certain away matches, and the cramped old bus that transports them about the country, with bags and balls and training gear stopping the spare wheel rolling up and down!

It time the FA grew some and ensured that the dealings around  the women's game in England is open and transparent,and given the Fair Play and Respect due,the shenanigans at present reflect on all in the game, and its hardly the best way to encourage new fans and future stars of the our beautiful game.