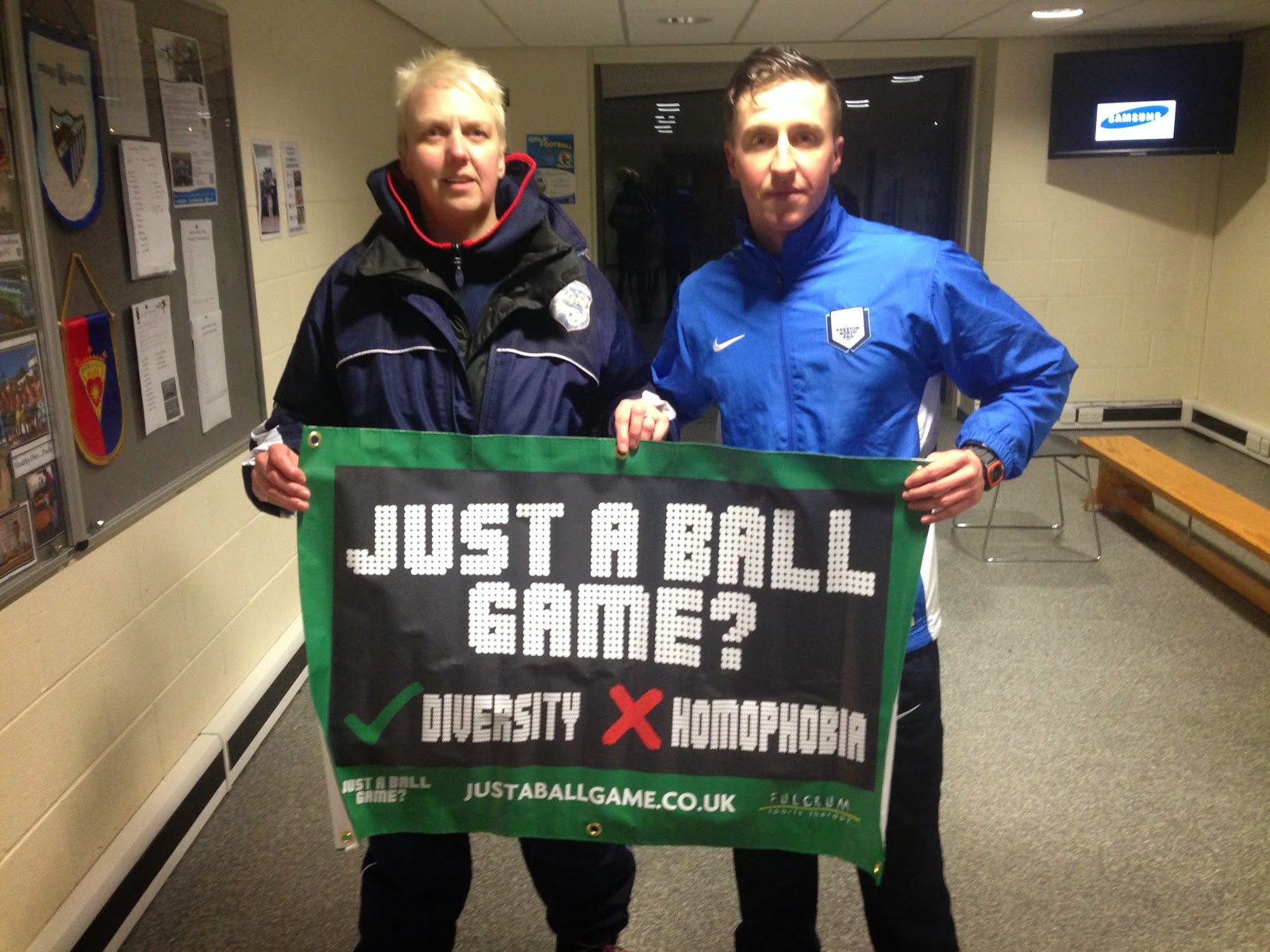 JBG? Founder Lindsay England with PNE manager Luke Podmore after establishing the link-up.
Preston North End Women are delighted to be able to confirm a partnership with Just A Ball Game? ahead of Lesbian, Gay, Bisexual and Transgender History month, next month.

The partnership will see the club become an official club partner with the organisation, who were set up to challenge homophobia in sport.

JBG have kindly presented the club with a range of their merchandise which will now be displayed at our home games with the team wearing JBG t-shirts in the warm up.

PNE Manager Luke Podmore was one of the first people at the club to be involved with the organisation of the partnership and thinks it’s another great campaign to be associated with.

“It’s a great organisation to be involved with. Like I’ve said in the past when we’ve worked with Stonewall, football is a great carrier of messages and it’s great that we can now help them reach out to people and raise awareness of what they do.”

“Alongside us there are a few other clubs at a similar level to us that are involved with Just A Ball Game? With us being higher up the footballing pyramid, we are able to reach quite a wide audience and I think teams like us have a responsibility of passing these messages on to combat homophobia in sport. Hopefully more clubs will now follow suit and promote the good work the organisation is doing.” 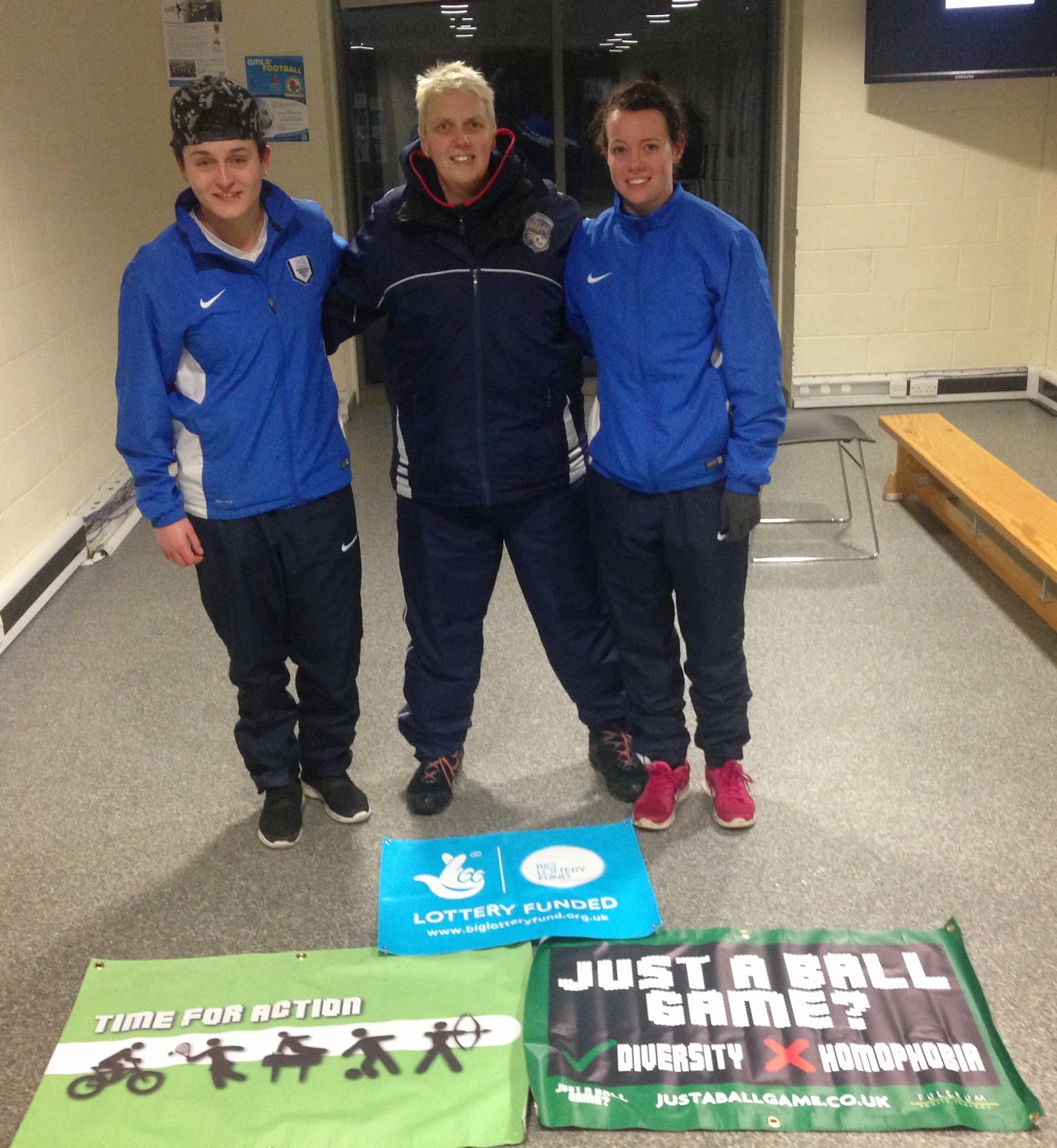 “It’s very encouraging for another women’s side to come on board and join forces with us. It’s great that we’ve got a campaign out there that is challenging homophobia in sport and, at the same time, raise awareness about LGBT issues. The more teams that come on board, the merrier and we need to build on what we call a gay/straight alliance. It doesn’t matter to us if anybody that supports our campaign identifies themselves as LGBT or whether they identify themselves as being straight, the more people on board supporting us, the better.”

“It’s very important to us that clubs high up in the pyramid support the campaign because we all need those role models, especially in the women’s game as it’s very hard to break through in what is such a male dominated sport like football. Birmingham City are the only team in the Women’s Super League to support us and we need those role models higher up supporting what we do because it shows that people are respected in the game. Lianne Sanderson and Casey Stoney are two of the stars at international level that have  come out, along with our patron Andie Worrall, and it shows they’re not afraid of showing who they are and are also great role models for young LGBT that might be a bit shy in telling their friends or their parents. It gives them someone to look up at and aim to be like and say ‘look these people are in that environment and they are happy’ and ultimately it should lead them to become a better player or better all-round person.”

For more information about what Just A Ball Game? do, visit their website - http://www.justaballgame.co.uk/

TUC launch toolkit for unions to tackle homophobia in football- with JBG? 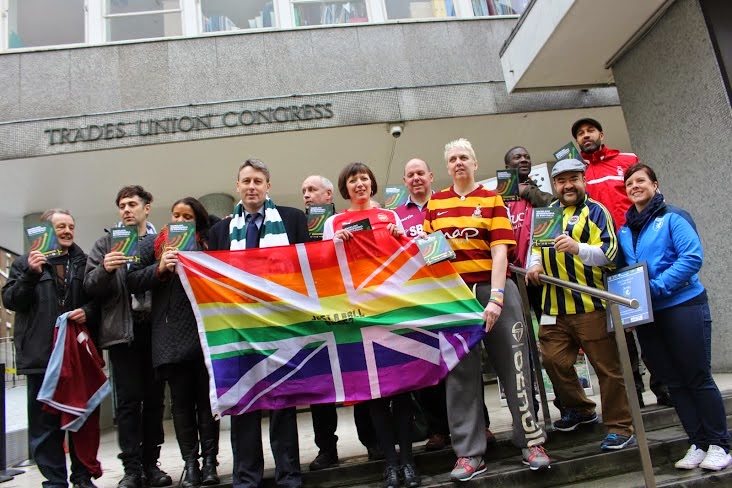 TUC launches toolkit for unions to tackle homophobia in football

A toolkit designed to stamp out homophobia in football is being launched today (Wednesday) by the TUC as part of a concerted action by unions and their allies.
The toolkit is to help unions challenge the prejudice faced by many LGBT people in football and wider sport. It was written and designed by members of the TUC alliance against homophobia and transphobia in football in association with The Professional Footballers Association (PFA), the Communication Workers Union (CWU) and Just a Ball Game? – a campaign which challenges homophobia and promotes LGBT participation in sport.
The toolkit includes practical ideas and advice for union members on how they can best tackle homophobia at club level and what kind of resources they may need.
The toolkit will be launched at the TUC’s headquarters by Frances O’Grady, the TUC General Secretary, with members of the alliance including Gordon Taylor from the PFA, Maria Exall, chair of the TUC LGBT committee, and Lindsay England from Just a Ball Game? The launch is also being supported by Stonewall, the Gay Football Supporters’ Federation and the Inclusion Adviser at the Football Association.
TUC General Secretary Frances O’Grady said:

”Unions are continuing to do outstanding work promoting equality at work and in society in general. This toolkit will help them reinforce the message that there is absolutely no place for homophobia in football or indeed any kind of sport.
“Union activists have used this approach at a number of professional clubs in the past and we want to build on those successes.” 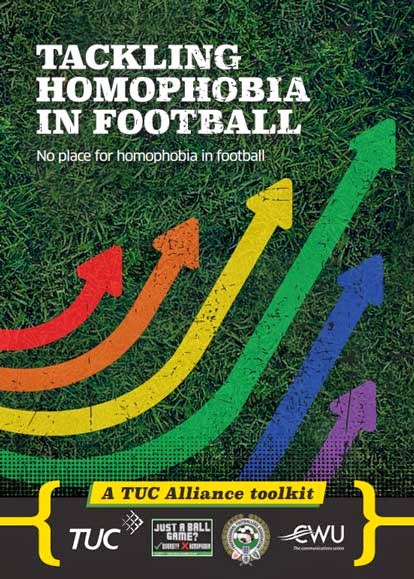 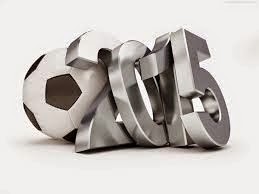