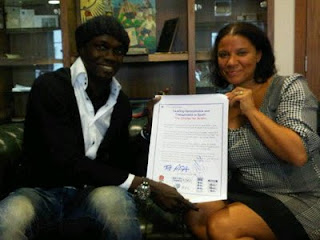 Efe Sodje, Bury and Nigerian defender,-first Professional Football Player to sign up to the Government ‘CHARTER’.
On the eve of the recent 21st birthday celebrations for Manchester Pride, the local LGBT sports teams and organizations gathered to kick off the weekends main events with the annual ‘It’s a Gay Knockout’ at Taurus Bar on Canal St.
This year, ‘loud and proud’ best wishes and a signed football, were sent to those competing from Bury and Nigeria defender Efe Sodje who took time out from his hectic pre-match routine and scheduled commitments to his own charity ‘The Sodje Sports Foundation (which aims to be inspiring and empowering for children and youths, as a result of promoting education through life skills and sport) to be available for a photo opportunity to help raise the awareness of LGBT inclusion in football.
Just a Ball Game? were pleased to join Efe and Senior Executive of Equality-Simone Pound, at the PFA’s Head Quarters in Manchester where Efe became the first professional football player to sign up to the governments, ‘charter for action against homophobia and transphobia in sport’
(https://www.facebook.com/#!/lgbtsportcharter),
the charter being initiated  as a direct idea and proposal to the GEO  at a TUC/Alliance meeting last December.
Efe is well aware ‘’how tuff things will be for the next professional player in football from the UK to ‘come out’ as they continue their playing career’’, and how much ‘’intrusion and unnecessary attention there will be from the press and media’’, and that unfortunately many bigoted supporters will not tolerate the announcement, Efe also thinks ‘’the player will have to be very brave and strong’’.
Efe spoke of how he himself is still subjected to abuse during games from the seemingly uneducated fans in stands and on terraces,(those these may not be the majority) even after all these years of many campaigns and events centered around minority inclusion in football.
Efe believes the fans  homophobia would be difficult to deal with, but thinks that from a professional game perspective ‘’the player would be accepted within a dressing room environment, and that team mates he hopes would be supportive.’’
As we are aware football still has a long way to go to even begin to state the game is becoming accepting of any LGBT’s who play, and indeed those who spectate as the game is institutionally homophobic, much work is needed to be done and everyone in the game from the very top, down through to grass roots has to take on some responsibility in dealing with this. The PFA are making small but welcome steps forward down that long road recently producing a poster to be displayed in professional teams dressing rooms, and they continue to be supportive of campaigns work and engage with the activist groups like, just a ball game and the TUC/Alliance group.
Lindsay England…
justaballgame.blogspot.com/
13/09/2011.
Posted by JUST A BALL GAME? at 13:04 No comments:

Here is a news item reproduced from a recent online article from the LGF which appeared over the summer after an interview with myself.

With kind permission from the LGF and their news team.

http://www.lgf.org.uk/news/opinion-ugly-side-to-the-beautiful-Philip Lahm calling for gay players to stay in the closet, MPs telling them to come out, FIFA President Sepp Blatter begging gay men not to have sex at the Qatar World Cup and the recent release of the report into Internet based football fans' homophobia: it's no wonder that the relationship between homophobia and football is constantly in the headlines.We're Not Homophobic, allout campaign have started a petition encouraging football's governing body FIFA to take a stand against such discrimination.change.org are currently calling on the newly crowned Premier League champions Manchester United to make an It Gets Better video to support LGB&T youth.The Justin Campaign
The Football AssociationJust a ball gameGay Football Supporters Network Village Manchester


OPINION: Ugly side to the beautiful game

Jack Stacey on the confusing swirl of homophobia and acceptance in the world’s most inclusive game.
Homophobia in football is nothing new, but has had a more significant focus of late. It seems that all the instances concerning the subject of homosexuality in football have culminated at the same time.
With Bayern Munich player,
The Women's World Cup kicked off this weekend and already a microcosm of the conflicting attitudes towards being  gay and kicking a ball around a pitch has flared up.
On the one hand, you have host nation Germany, proclaiming "It's ok to be gay". While the Nigerian team have allegedly sent the members of their squad suspected of being gay back home. In response, the
Closer to home Everton FC got involved with a number of community projects over IDAHO (International Day Against Homophobia and Transphobia), while America's
Surely in this country, it is the responsibility of the FA to take decisive action to eradicate any forms of prejudice within the sport. It is not as though there are no gay rights campaigners banging at their door; the problem seems to be that there is no one at home.
Numerous attempts have been made to launch awareness of homophobic attitudes within football. The anti-homophobia film which the FA commissioned last year received a mixed response; swirled in criticism and controversy since its inception, the one and a half minute video of a man hurling homophobic abuse at commuters and work colleagues and then at players from a football stand, had its release at Wembley postponed, leading many to question the FA's sincerity.
Prominent retired NBA basketball player, turned gay activist, John Ameachi O.B.E perhaps put it best in his blog: "Ninety seconds of bad language that will only be seen on the internet is not a solution to the problems faced by football and the concept of trying to create a 'viral video' to combat homophobia in football feels crass at best."
It seems to a lot of people, Mr Ameachi included, that no one area if addressed will solve the problem of homophobia in football. The approach needs to be holistic to tackle what appears to be a form of discrimination which is inherent and difficult to deal with, yet often based on casualness and ignorance.
The repeat offenders and hard-line homophobes need to be ejected or arrested while those who obviously don't know any better need to be educated. Too long has the terrace been a safe place for chauvinists and it is about time that they are held to account.
The We're Not Homophobic research was conducted over a period of 16 weeks last year, internet mediums for football fans were studied and it was found that just 400 links had over 8,000 threads containing homophobic wording, of these 1,500 contained homophobic abuse and anti-gay hate.
It's tragic that 13 years after Justin Fashanu's suicide - the only high profile professional footballer ever to come out - widespread homophobia still continues in the game.
The recent coming out of Swedish footballer Anton Hysen is perhaps a glimmer of hope - so to is the FA working in partnership with The Justin Campaign, but there are still lots of challenges ahead.
It seems what has emerged is a type of stand-off between the administration, the players and the fans. Surely, this means that it is about time someone plucked up the kahunas and made the first move.