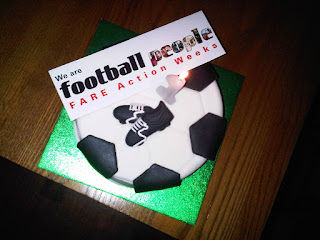 FARE (Football Against Racism in Europe) weeks of action -cake.
Well what a busy last week in October 2011 it has been for LGBT sports people!

Just slightly off tack I would like to say huge congratulations to my friend Elly Barnes a music teacher, trainer and diversity officer from London who topped the IoS Pink List this year, it was well deserved.
While we are on the pink list Steven Davies England's one day and 20/20 wicketkeeper-batsman was also in there at number 12.

Here in Manchester we had the official launch of Just a Ball Game?(JBG?)as a campaigns and activist group,a year on from starting out as a blog.Then LGBT sports people from Northern Wave Swim Club and Manchester Sharks Water Polo side joined football fans in a Sports Swap event as part of this years FARE (Football Against Racism in Europe) grass roots events which aimed to bring another strand to the campaign by raising awareness around LGBT issues in the game as part of the annual weeks of action.
John Amaechi, Gareth Thomas, Bristol rugby player Jed Hooper, featured in news items while Wycombe Wanderers and Charlton Athletic become the first 2 professional teams in football to sign up to the government charter. A little further afield in Germany a former Wolfsburg player dismisses once again gay rumours, and Abby Wambach is highlighted as endorsements don't follow those of fellow teammate Hope Solo, while both women look set to find new sides to turn out for with the WPSL enforcing a ruling and closing the club down.
So lets have a look in a little bit more detail as to what has happened over the last 10 days shall we.

England cricketer Steven Davies, 24, who also plays for county side Surrey 'came out' earlier this year, the first professional in modern day Cricket to do so.This was a huge effort on Steven's part as his family and close friends had known for a number of years his sexuality but he wanted his team mates to know the truth also and took a big step in telling them. On doing so Steven became one of only a handful of LGBT sports people to announce their sexual orientation publicly while they are still a playing professional.Seen as a role model to aspire too for a younger generation the Pink List this year recognised Steven's efforts to raise awareness of LGBT participation in professional sport and put him at number 12 on the list.

Just a ball Game? started out 12 months ago as a blog off the back of 5 years work in and around lgbt issues in football and the challenges that are faced in dealing with homophobia in the beautiful game.As things now need to be taken to the next level JBG? will be applying for funding over the coming weeks and months to extend on ideas and activities to raise awareness around LGBT inclusion in the game and has now been launched officially as a constituted campaigns group.
The launch although low key its-self was part of this years FARE event in Manchester when local LGBT swimmers joined local lgbt football fans for a Sports Swap event.The football fans attended the regular swim/ water polo session and then the swimmers in turn (joined by lgbt runners/ tennis players and other local lgbt people and reps from unions) spent a few hours entertaining at Taurus Bar later that evening when the dvd about an LGBT football team ''KICK OFF'' was shown (some liked it so much they asked to take it home with them to watch again),and as well as handing out give aways to the general public and asking them to sign the government 'CHARTER' against homophobia and transphobia in sport the event was rounded off with a light-hearted Table Football Challenge!

A couple of days later JBG? carried on the FARE weeks of action campaign handing  out badges/posters/flyer's and posed for many photos with local fans in Zwolle,before the Holland v England women's international qualifying game. 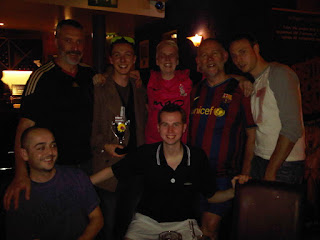 Manchester also saw one of it's very own LGBT heroes honoured this week when ex-NBA star John Amaechi who told the world of sport he was a gay man shortly after retiring from playing professionally, received his OBE(which was announced in June this year)from Prince Charles in recognition of his services to sport and the voluntary sector.

Sadly we see that Gareth Thomas who in his professional career played both codes announced his official retirement from international and club rugby a few days ago at the age of 37.A proud Welshman born in Bridgend,Mr Thomas who played much of his early career in union then switched codes to league a couple of years ago and stated he was gay, was one of the only a few in the game to do so, Australian League's Ian Roberts and and fellow Welshman (who was an assistant ref in the recent Rugby Union World Cup Final in New Zealand) ref Nigel Owens being the others.Gareth said he will always have a great passion for the sport but felt it was time to hang up his boots as he could no longer give a 100%.

Following in Gareth's footsteps we see 22 year old Jed Hooper captain and back row forward of Bristol rugby team Old Redcliffians make a media announcement to disclose he is gay after telling his family and friends at the start of the the year.
Mr Hooper is a hotly tipped prospect to be a star athlete in the future and he decided that he didn't want to hide who he was any more,and after firstly trying to deny to himself his sexuality now sees that his ability to be open has changed him as a person and for the better lifting a huge weight from his shoulders.He hopes that he can now inspire others who are in the same situation he was that there is light at the end of the tunnel and to not bottle things up, ''trust me the world is not against you.''

In August this year we saw Bury defender Efe Sodje become the first professional football player in the UK to sign up to the governments 'CHARTER' he has been joined this week by 2 professional football clubs from league 1 in Wycombe Wanderers and Charlton Athletic. Captain of Wycombe and the club's PFA representative Matt Bloomfield and Charlton boss Chris Powell signed on behalf of their teams who have now committed to tackle homophobia and transphobia in the sport.Support for the 'CHARTER' has been steadily growing and over 2000 NGB's sports stars past and present and grass roots teams and players and fans have now signed up to the initiative.Lets hope its not too long before all 90 remaining professional football clubs in the top 4 English divisions follow suit and also sign up helping to challenge the anti-gay feelings and abuse there unfortunately is within the game.

Over in Germany this year we have seen the topic of homophobia and 'gay players' discussed on a number of occasions in the past 12 months with much debate both for and against whether a player 'coming out' would be good for themselves and the sport. The most recent to do so is former Wolfsburg international player Arne Friedrich who when questioned on a talk show TV interview was once again found to be playing down speculation about his own sexuality,the day after his girlfriend of 10 years even commented on the issues of her partner.The player himself said he does find it a little odd when the word 'gay' comes up on Google in association with his name and says ''there is no debate, as far as I am concerned,'' adding he had ''never met a player who I even suspected of being gay, but if that was the case, it would have been OK as well.''
When he was questioned further about the possibility of a player coming out he replied, ''I think it would be quite difficult,especially in football,there would probably be some headwind.''
German football itself through the FA has been pro-active for a number of years now fighting homophobia and most of the Bundesliga teams have their own LGBT fan clubs who are identifiable in the stadiums.Its generally thought in Germany that improvement is still needed so that the situation of a player still in the profession will feel confident to announce their sexuality and continue to play and be accepted, this could be achieved by education, coupled with stricter punishment for homophobic behavior on and off the field.Also that once the stigma itself is targeted,the fear felt by those affected will alleviate,too.


As we hear this week that USA stars of the Women's World Cup Abby Wambach and Hope Solo are looking for a new club to play for next season as Magic Jack have had their franchise terminated by the WPSL (women's professional soccer league) following conflicts over sponsorship signs at matches and other expenses leading to points deductions and accusations of failing to pay bills tarnishing the leagues reputation, the women are also subject of media reports on their personal endorsements and their marketability.
Its been reported that while the players share similar adulation of the fans of their club and country and have similar attitudes towards playing the game and a love of it, and quite the same personalities, even long standing endorsements with high profile companies, they are seen as being a world away in terms of how these companies including ESPN value them because of their different sexualities.When Hope is very much seen as someone who can sell 'heterosexy' Abby is not, and true to form the very thought of selling Wambach to lesbians is out of the question! So, for now while we see Solo on DWTS, appearing on the cover of sports magazines and turning down shoots for male magazines and pulling in millions worth of dollars we don't see Wambach doing the same.This is often brushed off with comments that Abby doesn't court the same publicity,but it is not widely known that she 'is out' but its not a secret either and some of the coverage she has heavily points to the 'lesbian thing' of it all, and we can't have that can we,its not good PR and so little time or space is given to a strong successful female athlete if she is not heterosexual or perceived to be one.
Quite something when you think that 30 years on from professional tennis and the companies who sponsored it having this attitude, sport and its associates are still living in the dark ages around LGBT players.
So a mixed week for LGBT sports people, but was it a mad week or a mad world? 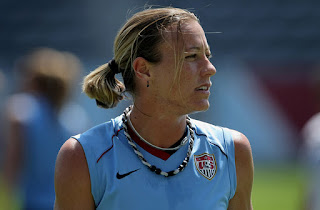