Phuti Lekoloane becomes a patron of JUST A BALL GAME?


Phuti Lekoloane becomes a patron of JUST A BALL GAME? 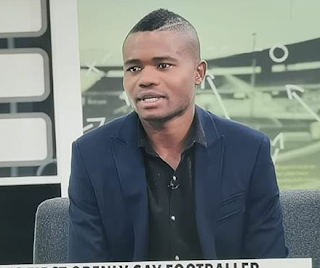 As LGBT History Month 2020 kicks off, here at JUST A BALL GAME? (JBG?) we are happy to announce that the only ‘out’ gay South African full time footballer, Makapanstad Romans’ goalkeeper Phuti Lekoloane joins us as a patron.

Co-Chair of (JBG?) Alan Mercel-Sanca says, “We feel privileged when athletes from across the globe join our campaign and are excited at having Phuti on board.”

Phuti wasn’t always a keeper, during his school days at Nkoana Primary and then Alan Ridge combined school he began his playing days as a right winger and sometimes a striker.

Sadly Phuti faced bullying at a young age and in those days considered this to be the norm. He quit the game, and instead played netball. Physical harm followed when he was in his teenage years and it’s there realisation kicked in that this discrimination was wrong.

As a full time player Phuti also faced much discrimination and homophobia so it took some years to settle with a team and be accepted. Looking back to when he joined Tornardo FC the best thing about his time there was, Phuti says, “It’s that I was allowed to be myself and express myself all the time. I think the most important thing was I was never reminded that I am sexually different to others, the brotherhood was on another level.”

When asked about his thoughts on joining JBG? and being an ‘out and proud role model’ Phuti says, “ There are big responsibilities in shaping the future of the next generation of young LGBT+ athletes and taking the bait – I’ll help to create a safe space for them.” 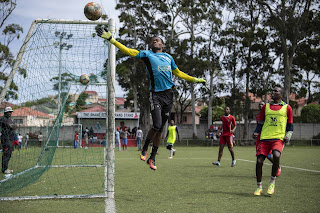 info@justaballgame.co.uk
Posted by JUST A BALL GAME? at 19:48 No comments: