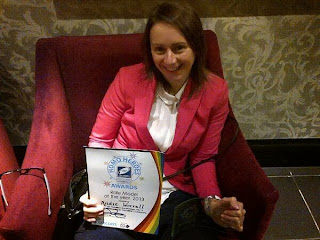 Here at Just a Ball Game? we are extremely pleased to announce that our patron, Manchester City Ladies goalkeeper Andie Worrall has won this year’s UK LGBT Role Model of the Year award at a presentation evening in Manchester hosted by the Lesbian and Gay Foundation.
Over 500 nominations came in through 8 categories and in excess of 6000 individual votes were cast for this year’s Homo Hero Awards in which outstanding people and organisations are recognised.
In winning the award Andie saw off some stiff competition in the category for Role Model of the Year from much more well established sports stars in Gareth Thomas, Robbie Rogers, John Amaechi, and LBGT personalities such as Clare Balding, Heather Peace and campaigner Peter Tatchell who were all nominated as role models. 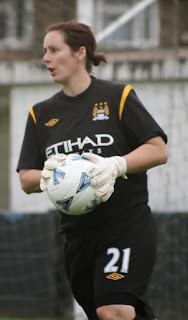 A shocked and  very humble Andie thanked a number of people for their support over the years including her mom and dad and girlfriend after being presented with the award, and continued saying “This was totally unexpected, I was very proud just to be nominated and was here to enjoy the evening being part of a community event which recognises some great achievements across the UK.”
Andie continued, “I hope I can, as a patron of Just a ball Game? be an inspiration to young LGBT people who want to play football and other sports and show that if you work hard and have support around you playing at the top level is something which you can achieve.”
The on-going work at JBG? will see an educational pop-up banner and posters featuring Andie be available to hire and buy in the coming months as part of both the TIME FOR CHANGE-NOW! and THINK BEFORE YOU CHANT!  campaigns that we run, which aim to raise awareness around LGBT participation and inclusion in football and also challenge homophobia, biphobia and transphobia.
Contact for further information:
Founder -Lindsay England
info@justaballgame.co.uk