Think Before You Chant - Hyde FC 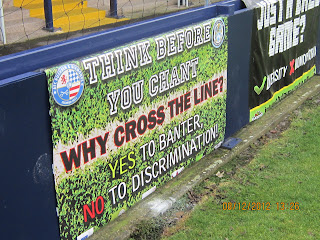 Following a successful event day on 1st Dec 2012 which saw HYDE FC host a Blue Square Bet Premier match as part of 2012 World Aids Day, a week later the Ewen Fields side became the first professional sports organisation to showcase the "TIME FOR CHANGE-NOW" exhibition as part of the "THINK BEFORE YOU CHANT" awareness raising day.

The day was funded with a grant from the European Gay and Lesbian Sports Federation (EGLSF) as part of their EU project "Preventing and Fighting Homophobic Violence and Intolerance in Sport.

In addition to the exhibition a "Think before you chant" banner was put up pitch side.

The anti-homophobia campaigns group Just a Ball Game? have been co-delivery partners of this initiative with originators AFC Rushden and Diamonds who hope to send their fans away with the correct messages of what is acceptable to sing at games and what constitutes as unwanted and unnecessary discrimination.

Lindsay England who is Founding Director of Just a Ball Game? said: "Sport as a whole at present only touches on diversity and inclusion for those who identify as LGBT, and although a number of LGBT people are involve in sport at grass roots level are 'out' to family and friends, team mates and some club officials, those who participate at elite level and are 'out' publically are few and far between. So, with this in mind we are proud to be delivery partners on these initiatives."