Shortly after being crowned Blue Square North Champions and gaining promotion to the Blue Square Premiership for the first time in the clubs history, Hyde FC also had further recognition in becoming the first football team (in the world) to receive a copy of the new Show Racism the Red Card DVD and education pack which looks at challenging Homophobia within the game.


Founding Director of ‘JUST A BALL GAME?’  (a campaign group which challenges issues with homophobia and anti-gay prejudice and helps raise awareness around the inclusion of Lesbian Gay Bisexual Transgender people,) Lindsay England presented the club Secretary Andy McAnulty and former Chairman Allan Kenyon with the resource as one of the delivery partners for the ‘Homophobia let’s Tackle it!’ which SRtRC have produced in collaboration with a number of LGBT organisations and also celebrities including former England rugby player ben Cohen, Hollyoaks actor Kieron Richardson and Scottish comedian Rhona Cameron.


Hyde FC have also pledged to make tannoy announcements before kick -off at home matches and  change their ground rules and regulations to incorporate alongside Racism,” Homophobic  abuse, chanting or harassment  is strictly forbidden and will result in arrest and/or ejection from the ground.” 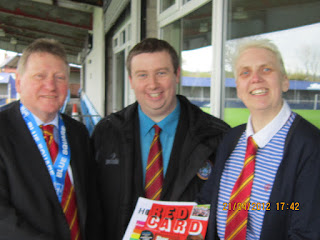 Mr McAnulty added ‘’It’s fantastic for Hyde FC to be involved in such a campaign and we hope this will encourage other clubs throughout the whole of the UK to join in and help eradicate homophobia and anti-gay issues from the game.’’


Lindsay England:     info.justaballgame@yahoo.com
Posted by JUST A BALL GAME? at 16:23