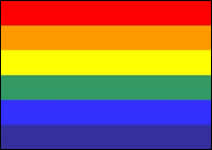 The PFA (Professional Footballers' Association ) joined the FA and joint host Kick it Out and Pride Sports as panelists for a debate on homophobia in football as one of LGBT History Month's numerous events, in Sale last night.
A year ago PFA Chief Gordon Taylor stated 'homophobia was not high on the sport's agenda and that the time would be more appropriate when crowds are a bit more civilised.'
Then it was the turn of soon to be Chair of the PFA Clarke Carlisle who was interviewed for the Inside Sport BBC programme.The only player willing to speak out about the Taboo subject on camera, only once again an opportunity was missed to be radical and speak out to millions watching, and help get LGBT's seen in a positive light and issues around homophobia 'normalised' and 'usualised' when the following question about 'what would be the reaction of fellow players if someone said 'I am gay?' was answered by Mr Carlisle in this way:
"It would be a shock, there would be a stigma and an apprehension about it.It's understandable because its an all male environment."
"If i was in a dressing room or a showering area with 11 other fit females even if they had faces like slapped boots i think I would be aroused. So it proppers the question for me  would it be the same for a homosexual man because he will be in this environment with 20 athletic strapped lads and would it be the same for him? these questions would be asked , understandably so."
Ok,so he was the only one willing to talk about things , but why not tell it like it is, if you are going to use a dressing room area analogy you could say, 'there are 20 guys in here plenty of testosterone all naked one or two, maybe half of them at some point would be aroused as we are all human beings and that is a human reaction, so why should it matter if one of us was a gay man, it shouldn't.' Surely a better way of getting a message and a little education across?

Its seems that the players union organisation hasn't moved on too much from these thoughts 12 months on dispute representatives attending a number of meetings and conferences with LGBT campaigners and sports groups and listening to concerns.
The PFA were represented by former professional player Michael Bennett who said he was the person a player would be able to come too should they wish to discuss their sexuality with some one from the organisation.Michael also said 'things were in place to support a player' if they decided to make this decision.Unfortunately when I pressed for an explanation as to exactly what  'things to support a player ' actually consisted of , Michael backed up by the two other ex players present in Andy Hinchcliffe and Earl Barrett,all began to skirt around the answer some what and stated that they all delivered equality and diversity training at grassroots clubs and in schools as a whole to youngsters and they would advise what is acceptable behaviour on the field and what was acceptable language. and this was part of the training they now give out to young professional players they work with. I pressed again for an answer as to 'what things were there as support' finally Michael backtracked and said that there was not anything as such as this situation had never actually arisen yet no one had come to him for advise about coming out and it would be delt with as and when someone did decide to ask for support.
So basically we can take it then that the PFA have no strategy in place to help a player or a scholar who may want to open up about his sexuality, they have identified an ex professional to be the person to offer the support, but this person has had no experience of any LGBT issues that may need to be faced, no specific training around  the understanding of homosexuality no training or voluntary experience at an LGBT organisation  and not even any basic understanding of the lives of LGBT people as they have never engaged at any length with an LGBT community.Quite how then this seems to be the best option the PFA can deliver by the way of support to a professional player who wants to come out is beyond me!!
I fear the worst for anyone who ventures down this avenue if this is the best and only option the PFA can offer one of its members.
The whole panel of football representatives stated how they thought they needed to be more visible around what they are actually doing to challenge homophobia within the game. Cue then the PFA rep to speak to the small audience present about something they were pro-actively doing you may think, and talk about the the fact that a PFA rep was present for the TUC/Alliance photo shoot for FOOTBALL v HOMOPHOBIA day then, but no ,silence.Maybe then it was a chance to highlight the poster campaign they had put together over the past few months(whatever this may be), but no, silence.So  you can see the PFA have pushed the boat out and really got to grips with putting a strategy together and spending  what all of 350-400 pounds on challenging homophobia in the game.Not no where near enough when you consider just over a decade earlier the PFA paid 1.9 million  pounds for the Lowery painting 'going to the match', talk about get your priorities in order
Not being very visible then after all eh around  the homophobia in football issue.
Just think what they could have done, posters out to every football club dressing room and a couple of players seen in a picture as pinning it to the wall saying 'zero tolerance to homophobia' think of the knock on effect it would have had also if that image had been put in the programme for the next game, grassroots clubs ordering the poster to put up in their clubs  if its good enough for the pros to have an anti-gay poster up then so can we. Sometimes i despair, this is the time, the time for action, yet no one wants to be seen taking any.