Update for you all on what's happening with some of the Football v Homophobia events. 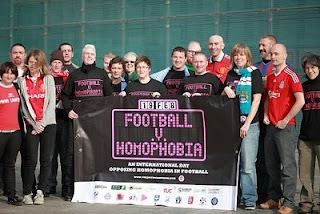 The above picture was a flash mob style event held in Manchester for F v H 2010.


This year if you live in Manchester, London or Paris you can be part of a EURO TRI-CITY 24 hour event 15/16th of FEB. Come along in your football colours (or any sports colours) and join in the photo shoots.
Raise the FOOTBALL v HOMOPHOBIA banner and raiser awareness.


Below are the details of the Manchester, London and Paris meets.

Vanilla will host the first photo shoot event from 7pm-11pm.
You can call in for a drink and raise you glass in honour of Justin Fashanu and help out to raise the banners, flags, shirts and other football colours (and sports colours) to raise awareness of homophobia in football and also celebrate LGBT history month.
I am planning a group picture for around 8pm with the banner  and then folk can have whatever sort of football v homophobia related picture they want for the rest of the evening whether they stay all night or just 5 mins.
Its hoped also that we will show the 40 min film Brighton Bandits.
We will give everyone flyer's and posters and stickers to take away with them to use on 19th at their own team event, club , uni/ student meet or workplace to recognise F v H day. we will give out T-shirts and footballs as prizes. The England flags will be signed to pass on to football authorities and government as a petition asking them to take action against homophobia in football.
As Vanilla is the women's venue we want as many girls and trans folk to attend the event.

Next day 16th i will transport the banner to London for a 9.00-.10.00am meet and photo shoot at 9.00am,  the event will take place outside the TUC headquarters on Great Russell ST. in London. We will recognise F v h day and LGBT history month with a banner and wearing football colours.

We will have the photo shoot outside TUC headquarters with TUC leaders including General secretary Brendan Barber union staff and Football authorities and representatives from the LGBT community, we will be handing out flyer's etc to the public etc once again.

An hour later i will head off on Euro star to Paris for the final photo shoot at 6pm (so as to be inside the 24 hour deadline) at either Stade de France or Eiffel Tower along with friends from Paris and hopefully members of the Paris Foot Gay football team. Again we will raise the banner and fly our colours for Football v Homophobia. 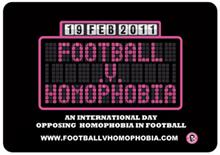 Below is a link for anyone who wishes more information of how they can be involved with FOOTBALL v HOMOPHOBIA day FEB 19th.