what is FOOTBALL v HOMOPHOBIA?


On February 19th 2010, The Justin Campaign launched “Football v Homophobia” – An international day opposing homophobia in football. The intention of this initiative is to provide an opportunity for individuals, communities and teams the world over to communicate their disapproval of homophobia in the game and celebrate its diverse following under the banner of Football v Homophobia.

The initiative is now about to enjoy its third year! Its growth and success is testament to all those who have supported and contributed to its development.And remember you don’t have to be a football fan or a sports group to back the campaign! Impacting on homophobia in football will communicate a zero tolerance attitude to homophobia, in any shape or form, across the world.

Football v Homophobia: football for everyone


18th – 26th February 2012
Football v Homophobia is an international campaign in football to tackle homophobia and prejudice against lesbian, gay, bisexual and transgender (LGBT) people.  It’s a campaign that is important for everyone in football, regardless of their sexuality.  Homophobia, prejudice and discrimination affect us all.  Justin Fashanu, the first ever out gay male professional footballer suffered bulling and hostility after his sexual orientation became public, but so too have straight footballers such as Graeme Le Saux and Sol Campbell.


Just like racism, homophobia, biphobia and transphobia tarnish football for all of us.  According to research (Stonewall 2009), almost 2 out of every 3 fans think that football would be a better sport if anti-gay abuse was eradicated.  52% of fans think that football should do more to prevent anti gay abuse and discrimination, whilst 70% of fans have heard anti gay abuse at football matches in the last 5 years.
Homophobic abuse is outlawed by The FA’s Ground Regulations.  It is punishable by both the police and also by The FA, in exactly the same way as racism is.  Chanting, verbal abuse, banners or text that uses homophobic, hateful or prejudiced language can lead to charges ranging from being banned from attending matches or being fined, to even imprisonment.
The aim of Football v Homophobia is to make football safe and welcoming for all.  We want to ensure that football values the contributions made by all people regardless of their gender and sexuality.  To get involved with the campaign and make a difference, visit our website: www.footballvhomophobia.com
3 simple things you can do to support football v homophobia
1.       Follow FvH and promote us on social media
2.       Take some simple actions to make a difference through our website  www.footballvhomophobia.com
Report any incidences of homophobic language at football.  Talk to a nearby steward, the police, a club official, or the referee or your County

what is LGTB HISTORY MONTH?


Once again the events of FOOTBALL v HOMOPHOBIA are also part of LGBT History Month.
We are lesbian, gay, bisexual and trans people and their friends.
We exist in all times and places. We speak each and every language. We laugh and cry. We talk and remain silent.
When we can, we attend school, college and university. When we can, we go out into the streets. We read the papers and watch the TV. We attend church, synagogue, temple and mosque. We are free and confined. We celebrate and we hide. We are happy and sad. We are supported and alone.
Our lives are both ordinary and extraordinary.
LGBT History Month is an opportunity for all of us to learn more about the histories of lesbian, gay, bisexual and transgender people in Britain and Northern Ireland.
Since 1997 the position of LGBT people has improved as a result of human rights legislation. Transsexual men and women are now able to assert their gender on passports and birth certificates. Section 28 was repealed in 2003. Since 2010 we have had a single Equality Act that includes sexual orientation and gender reassignment among its protected characteristics. A crime with a homophobic motive is now a hate crime. LGB people can enter civil partnerships and enjoy the same pension rights as  heterosexual couples. We have become visible in the media, from Saturday night TV and soap characters to dramas and documentaries about our LGBT ancestors. Out and proud gay and lesbian MPs sit in parliament in all the major parties.
Sport has also its share of LGBT's participating both at professional and grass roots level.
If we want it to have a major impact, we must share the responsibility for making it happen. Click here for suggestions for events and activities, as well as other information. 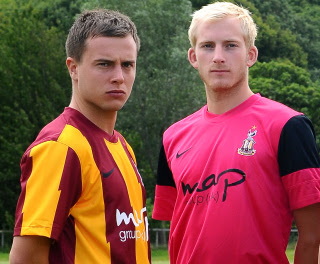 Since the introduction of  amendments to ground rules and regulations outlawing homophobic chanting inside football grounds in 2007, Bradford City FC (although sadly themselves have an unruly small element of support who do not adhere to complying) have engaged with LGBT community members, campaigners and activist in a number of ways to help reduce a homophobic environment at  the clubs home and away games.
The actions taken have been in the form of the following:
Immediately changing ground rules and regulations on display boards inside the ground and in the programme under the customer charter.
Likewise amendments were made to use of appropriate language on the official website message boards.
Fans were alerted and informed by both articles in the match day programmes from BCST, and City Gent fanzine with the clubs approval of the text.
Interaction with West Yorkshire Football Police Intelligence Units also led to tannoy announcements prior to kick off once again helping to inform all in attendance of the clubs intolerance to homophobia.
Incidents which were reported by fans at games were looked into and where possible, action taken, and also further instruction throughout stewarding and security prioritised to help with future prevention.

More recently the club have agreed for extra education to be delivered to match day staff, provided by Just a Ball Game? with continued support for this LGBT organisations efforts at raising awareness and building up a partnership with them. 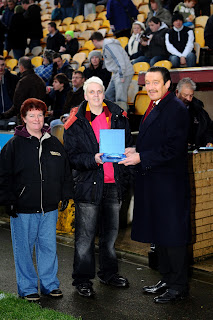 Bradford City FC also became the 3rd professional club to sign up to the governments charter which aims at tackling homophobia and transphobia in sport.


One of the biggest steps taken was for the club to become the first professional team to allow, endorse and host an event day on the 10th December 2011 when Just a Ball Game? teamed up with the CWU (communication workers union) for an ACTION DAY in which literature featuring anti-gay issues and highlighting LGBT issues within football were distributed to fans as they arrived for the home match that day.
The official signing of the charter was marked by team members David Syers and Mark Stewart having photos taken with CWU equality officers and Just a Ball Game?
Following this great work the club was recognised and given the first ever JUST A BALL GAME? award for Challenging Homophobia in Football, when a silver salver was presented to Alan Biggin pitch side before the Plymouth game.
Posted by JUST A BALL GAME? at 02:43