For the past two years FIFA have made it common knowledge that the very public chanting of homophobic biphobic and transphobic (HBT) abuse in the stadiums whenever Mexico play has been unacceptable, with warnings and fines handed out. What has not been made public until now are the reports of 15 other international teams fans (13 of whom are South American) who have on a number occasions seen fit to chant HBT abuse at games. Mexico have now been fined and warned by FIFA 11 times, Chile 9 and Argentina 5 times.

The report made public by FIFA on 2nd Oct 2017 can be found here: http://resources.fifa.com/mm/document/tournament/competition/02/91/01/10/fifa_disciplinaryoverview_2018fwcqualifiers_2october2017_neutral.pdf  with the message “Following the latest meeting of the Disciplinary Committee, FIFA can today confirm the sanctions imposed for incidents that occurred during the latest round of the preliminary competition for the FIFA World Cup.”

Moving forward JBG? and Bradford City LGBT+ fan group would like assurances anyone participating in or involved in football in any way will be given the protection and support necessary should similar incidents occur. 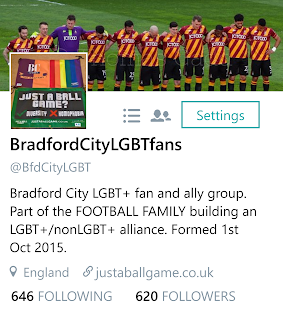 One of the founders of Bradford City LGBT+ fan group Richard Dunbar, who later this week will present at the Queer Football Fans conference in Dortmund Germany says, “As the football world’s governing body FIFA has a moral obligation to ensure that all fans feel included, and know that, should they be victims of any kind of abuse a zero tolerance and appropriate action will be taken. All the facts prove that members of an LGBT+ community are more likely to be victims of abuse and discrimination therefore it is incumbent upon FIFA to ensure they proactively engage with campaigns like JBG? and LGBT+ fan groups
globally to ensure their needs are met and they feel included in all aspects of the game.”

A JBG?  spokesperson said, “We would like to see FIFA work in collaboration with organisations like ourselves and also LGBT+ fan groups to educate and train stadium event day staff in dealing with HBT discrimination promptly. We have already created resources for Kick It Out and the Home Office which have been in use in the English leagues by clubs and have been very well received by all. These publications and accompanying workshops alongside educating supporters on what is acceptable language could be adapted and used by all FIFA member countries FA’s as a great starting point on taking a much needed zero tolerance.”