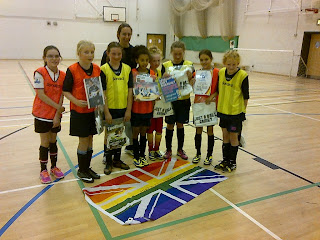 The girls had a chat with Andie midway through the indoor training session,who was keen to hear that the girls were unbeaten so far this season in the North Manchester League, including a 6-1 victory a few days earlier. The girls were quick to raise their hands when asked who was scoring the goals.They were presented with a football birthday cake and JBG? T-Shirt goodie bag each and they also posed for pictures with Andie,
who originally hails from Hyde.

Anyone who visits Hyde's home game v Chester on 9th November will see the rainbow flag on display at the match for the first time, as the Conference Premier side have followed in the footsteps of Bradford City and agreed to raise a 'pride' flag at all home games which shows their continued commitment raising awareness around LGBT issues and highlighting LGBT inclusion in the game from a non-league perspective. 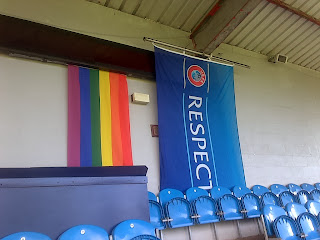 info@justaballgame.co.uk
Posted by JUST A BALL GAME? at 19:19