Greetings Just a Ball Game? followers. My name is Bob Woods and I have just joined JBG? to help with the communications, twitter, facebook and blogs etc. So in my first week I am pitched into the fray head first with two outings with Lindsay England into a world of football I had really lost touch with,
On Tuesday, 18t September 2012, JBG? had been invited to AFC Rushden & Diamonds. They were wanting to sign the Sports Charter for Action on Homophobia and Transphobia, and to unveil the JBG? banner behind the home goal. The Chair , Ralph Burditt, wanted to show the clubs continued commitment to diversity and respect, and launch its own "Think before You Chant" initiative.

Rushden & Diamonds have been through some difficult financial times but also experienced personal tragedy with the untimely death of their Goalkeeper Dale Roberts. Meeting the lovely people at the club from board members and all those volunteers which keep a non-league club going, I was overwhelmed by their sincerity, friendliness, and willingness to embrace the message of Just A Ball Game to respect Diversity and challenge Homophobia. 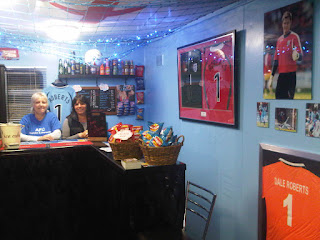 Dale's Bar, transformed from a porta cabin by volunteers, showed that this club has a huge heart!
And the penalty shoot out between Castor the cat and Dazzler was hilarious!
The photos of the night show the genuine enthusiasm we experienced, I was left wondering "why can't all clubs be like this?" . Given time and resources, maybe they can! And if clubs like AFC Rushden & Diamonds from the United Counties League can do it....so can the Premiership and Football League! 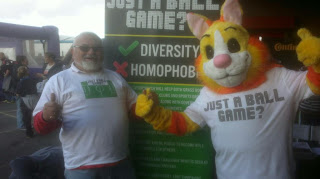 But that was not the end of my week, On Wednesday, !9th September I accompanied Lindsay to Walsall for the Euro Women's Qualifier England against Croatia. Although we experienced a few problems mainly one part of the FA not knowing what the other part had agreed to ( the hanging of the JBG? banner flag beside the goal) it was an insight into why we need to concentrate on the grass roots to change the culture from the bottom up. I was impressed by the numbers of parents and teachers who came up to our stall, and especially a conversation I had with group of teen girls , all keen football players, about homophobic chants and slurs, I was surprised by their understanding and experiences, It made me realise we cant wait for the "Blazers" in the Board Rooms to change the culture on the terraces and on the pitch, its the next generation , their teachers and parents who are going to challenge the old attitudes and make football a safe place for LGBT players and supporters.

Wednesday also saw the publication of the report from the Culture and Media Committee. This report identified homophobia as a major and growing issue. A cursory glance at the websites of the FA, Premiership, and Premiership clubs shows huge gaps between those clubs who have taken a lead ( e,g going to local LGBT Pride events, holding diversity training for their staff etc) and the majority who appear to have done very little beyond signing the Charter against Homophobia and Transphobia in Sport. I will be looking into what clubs have on their websites and also what they have publicised in their local newspapers and media and report back to name and shame the slackers and congratulate and share the best practise!

You can follow me on twitter @dinglebaggiegay ( so called because I support West Bromwich and my boyfriend supports Wolves!) and I will be posting regularly on the Just a Ball Game? blog, Twitter and Facebook page. I am really pleased to be part of JBG? and I hope you enjoy my ramblings!